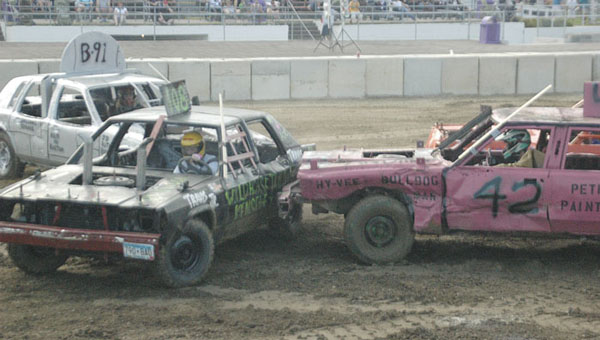 The annual demolition derby sped through the Freeborn County Fair on Sunday with a flurry of crashes, some bangs and an exciting flip.

The biggest hit and loudest cheer from the crowd came during the event’s compact car feature. Harry Whalen hit Dane Gilliam in the day’s second-to-last event, flipping Gilliam’s car onto its hood.

The crash shocked some but roused all as Gilliam was immediately pulled out from his car, unscathed, able to walk off the track on his own to applause. 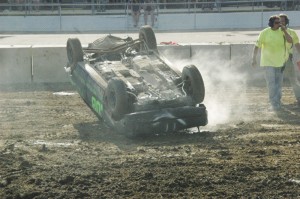 Crew members of Masters of Disaster, the promoters and inspectors of the derby, set gasoline that leaked from the overturned car ablaze, and the compacts got the green flag just minutes later.

Shawn Ellingson was the most aggressive driver after the crash, landing big hits and eventually trapping Cody Gaines’ car in a corner, forcing him to remove his flag for

The derby’s final event, the loudest and most crowded, was the feature, starring full-size cars.

Seventeen cars and drivers filled the muddy track but took a while to get going.

After that, there was action is each corner of the muddy track.

Tyler Tews and Tyler Johnsrud pancaked Kelly Ellingson’s No. 124 car, and Heather Nielsen took two big hits, lifting the front and back ends of her car. 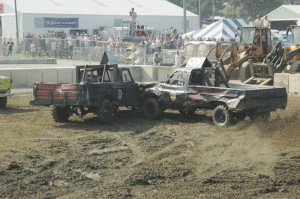 With four cars left, Mosloski broke his flag after his broken-down car flooded the track in white smoke and Darrin Sonnek smashed into Tews, knocking him out of competition.

The day’s feature event came down to Sonnek and Ellingson and the two collided head first and high speeds. Both cars stalled for a moment after the high-impact collision, but Sonneck eventually started moving and took home the championship.

The derby began 20 minutes behind schedule with two, eight-car heats of compact.

The heats were fast-paced, hard-hitting, lasted around 10 minutes each and the last four cars running in each heat advanced to the compact car feature.

The powder-puff derby, featuring women drivers, had only four.

Nielsen, who had won the powder-puff the past three years, was knocked out early in her bright orange station wagon.

Brooklyn Bergeson had two of the hardest hits of the day, backing hard into Heather Carlson and then forward into Carrie Clotfelter. 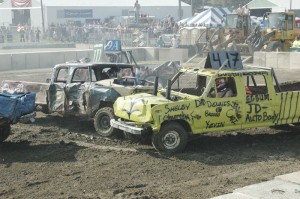 After the hit, Clotfelter’s car broke down and Bergeson landed one more hit on Carlson to win the championship. She was also named the powder-puff’s hardest hitter.

The trucks feature was the most violent event, with Dustin Eggum taking two hard hits early, whipping his body around inside his truck’s cab.

The trucks event was also the dirtiest, with many trucks showering the audience in mud.

With six trucks left, the red flags were waved to pick up debris on the track. A bumper and tire were picked up by a derby crew member and thrown into the bed of an abounded truck.

After taking early hits, Eggum regrouped and was one of the final two trucks, along with Jamie Neilon. Neilon rammed into Eggum’s passenger side door, burying Eggum’s no. 4.17 truck’s back tires in the mud. Neilon backed hard into Eggum’s truck twice, with large applause from the audience, before Eggum broke his flag, surrounding first place.

This year’s derby started late, but it took just over two hours for participants to crash their clunkers.