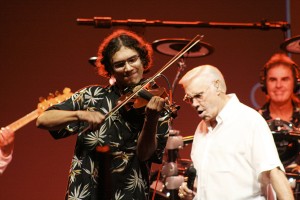 Fiddler Billy Contreras plays "Black Mountain Rag" while George Jones gets into the song Friday at the Grandstand of the Freeborn County Fair. -- Tim Engstrom

It didn’t take long to fill the Grandstand on Friday night at the Freeborn County Fair. People were standing if they had to just to see country music legend George Jones sing.

And during the second half of the concert, it wasn’t hard for the people standing to slip into a few open seats. The crowd was mostly older folks, and some left to hit the hay.

But it wasn’t a quiet crowd. People whooped and hollered for Jones at the start, middle and end. He began the show with “Why Baby Why?” and “Once You’ve Had the Best.”

His voice with rough at the start of the show. He said he was dealing with allergies.

“But anyhow, we’ll get it out of there in a few minutes,” Jones said. 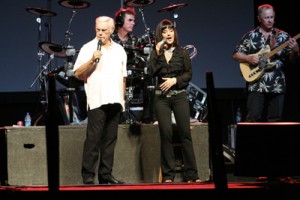 Country music legend George Jones sings a duet with Minnesota-born Brittany Allen on Friday night at the Grandstand at the Freeborn County Fair.

And he was right. His voice came back, but the allergies clearly were affecting him. He held tissues and wiped his nose during points in the show, making a few jokes about “all the snot rags.”

Jones sang “Choices,” then stopped to tell the fans how country music stations don’t play good old music like they used to.

“They quit playing those old cheating and drinking songs,” he said. “I don’t know what they’re singing about. I’d be out of a job.”

Jones performed with his band, the Jones Boys, and Minnesota-born singer Brittany Allen. It was Allen’s birthday, and Jones and the audience sang “Happy Birthday” to her.

After “Bartender’s Blues,” he said he was going to play an older song.

“It’s so old that to some of you, it might be brand new.”

Then he sang “Same Ole Me” to many whistles and hollers from the crowd.

ITC Midwest sponsored the show, helping the fair bring Jones and his crew to Albert Lea.

Jones was happy to give his fiddler player a hard time. Billy Contreras chews gum during the shows.

“He only chews gum when the song is over with. He can’t chew it while playing the fiddle,” he said. 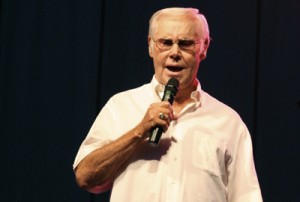 Contreras came to the front of the stage for songs like “Black Mountain Rag” and “Fire on the Mountain,” both featuring upbeat fiddle playing that got Jones and the crowd moving.

Other songs Jones sang on Friday were “I Get Lucky With You,” “You Oughta Be Here With Me,” “You’re Still on My Mind” and “I’m Not Ready Yet.”

He told the crowd that it gets harder to sing the fast songs. Jones turns 79 next month.

“They oughta have a rule that as you get old you can slow it down,” he said.

He and his launched into “The Race is On.”

Then it was “A Picture of Me (Without You)” and fan favorite “The One I Loved Back Then,” which most people just call “The Corvette Song.” Some people came to the show with Corvette song T-shirts, and the tune got a big reaction.

A screen behind the back showed the faces of deceased recording stars such as Conway Twitty, Hank Williams, Elvis Presley, Jerry Lee Lewis, Lefty Frizzell, Marty Robbins and Johnny Cash for the song “Who’s Gonna Fill Their Shoes.” The country fans whistled and clapped for images of the musicians they liked.

Allen and Jones had fun singing Tom T. Hall’s “Me and Jesus.” And they sang the duet “Take Me.”

When Jones began to sing “He Stopped Loving Her Today,” the audience gave its loudest response. One man sitting on the rail commented “Oh, man! This is the song right here.”

Other songs sang were “Golden Ring,” “Walk Through This World With Me,” “White Lightning,” “She Thinks I Still Care” and “I Don’t Need Your Rockin’ Chair.”

He really got into the last song. One stanza was particularly notable. Fans already know that George Jones’ nickname over the years is “The Possum.”

“I do my rockin on the stage. You can’t keep this possum in a cage. My body’s old but it ain’t impaired. I don’t need this rockin’ chair.”