Funeral services for Dennis Claire Anderson, age 66, of Albert Lea will be held at 1:30 p.m. Saturday at Bayview/Freeborn Funeral Chapel. The Rev. Kenneth Jensen will officiate. Interment will be at the Lakewood Cemetery with military honors accorded by Freeborn County area veteran’s organizations. Visitation will be from 5 to 8 p.m. Friday at Bayview/Freeborn Funeral Home and one hour prior to the service. To sign the guest book, go to www.bayviewfuneral.com. 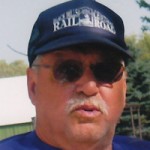 Dennis Claire Anderson was born on Feb. 23, 1944, to Clarence and Betty (Waggoner) Anderson. He grew up in Dawson and worked on the family farm. Dennis served in the National Guard for several years. On Sept. 14, 1968, he married Carol Zajac in Minneapolis. Through the years Dennis worked at several companies and was most recently employed at Spantac as a sheet metal worker. Dennis enjoyed fishing, auctions, farming, bingo, watching football (Vikings), wrestling and Nascar racing. Dennis also enjoyed spending time with his family and friends at barbecues, and spending time with his grandchildren and great-grandchildren. He will also be missed by his dog, Bella.