Ashley Anne Tukua and Christopher Alan Hotzler are happy to announce their engagement. 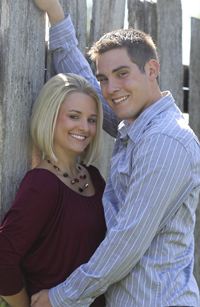 Ashley is the daughter of Brian and Leanne Tukua of Freeborn. She is a 2005 graduate of United South Central and a 2009 graduate of Winona State University receiving dual bachelor of science degrees in accounting and business administration. She is currently employed as a staff accountant for Hormel Foods in Fremont, Neb.

Chris is the son of Rick and Lori Hotzler of Wells. He is a 2006 graduate of United South Central and a 2010 graduate of Winona State University receiving a bachelor of science degree in business administration. He is currently employed as a production supervisor for Hormel Foods in Fremont, Neb.

Ashley is the granddaughter of Edward and Lois Tukua of Albert Lea, and Janet Schultz and the late Clem Schultz of Wells. Chris is the grandson of Stan and Betty Hotzler and Bruce and Dorothy Lease, all of Worthington.

The couple is planning an Oct. 9, 2010, wedding at St. Casimir’s Catholic Church in Wells.