Enough to go around 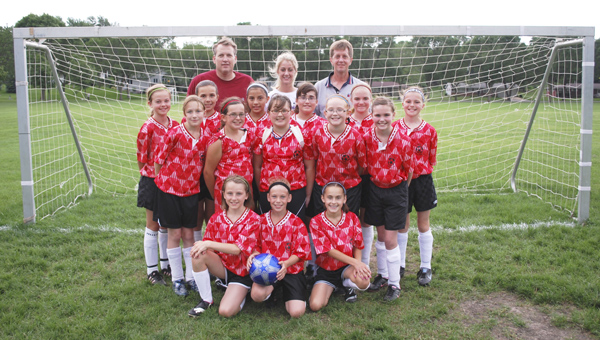 U-11 soccer is about player development and the season is about skill development with the knowledge that winning will follow.
Fourteen girls arrived at their first soccer practice this past April, some with limited knowledge of soccer and even less knowledge about each other; however, they did possess a willingness to learn. It was team with many new players and coaches wondering what they were getting into.
The girls started their season in May, playing in a Fairmont tournament and had success given their limited practice time. They went 2-1 at Fairmont, mostly on individual players dominating. The first three games of the regular season were against the two best teams in the league and the team was not ready to face the challenge, losing all three.
The girls improved throughout the season and they only allowed eight goals in their final seven games, four of which were shutouts. Three girls volunteered to rotate the goalkeeper duties throughout the season and improved as the season progress. They stopped many shots later in the season that would have been goals earlier. Unfortunately, one player saw her season cut short due to an injury.
In June, the girls entered the Northfield tournament and began to play as a team. Each game saw different players step up and rally the team to a 2-0-1 tournament record against non-divisional foes. League play also showed improvement as the girls beat a league leading Mankato team 4-0 late in the season after losing to them earlier, denying them a state tournament berth. The game really showcased the players’ improvement to an enthusiastic home crowd.
Anyone watching knew this team had jelled by watching the final few games. Players showed a confidence in their skills and unselfishness in their play, cheering on teammates for every success. Their efforts and teamwork resulted in 10 of 14 players finding the back of the net, scoring a total of 39 goals for the season.
The team voted early on not to participate in the playoffs and ended a very successful season with an 8-6-2 record.