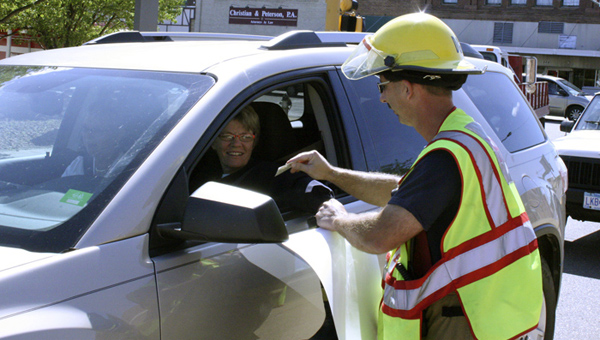 Albert Lea firefighters on Wednesday began their first of three days of fundraising on the streets for the national Fill the Boot campaign.

In three short hours, firefighters collected almost $1,500 in donations for the Muscular Dystrophy Association. They will be at the intersection of Broadway Avenue and Main Street again today and Friday from 3 to 6 p.m. to continue their efforts. 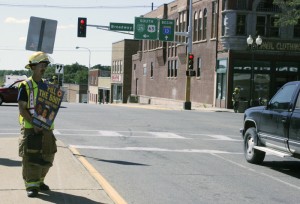 Albert Lea firefighter Dennis Glassel stands in the middle of Main Street in Albet Lea Wednesday afternoon collecting funds for the Fill the Boot program. Firefighters were at each of the corners at the intersection of Main Street and Broadway Avenue. -- Sarah Stultz/Albert Lea Tribune

“It’s awesome to see the community show their support,” said Alexis Butterfield with the Muscular Dystrophy Association. “The firefighters are fired up.”

It was the first year since Albert Lea firefighters have participated in the national program that they have been stationed on the streets; in prior years, they collected money during the Third of July Parade. Prior to that, they were at the Northbridge Mall.

With temperatures around 70 degrees, it made for a pleasant afternoon.

The firefighters were dressed in their full gear — minus their jackets — and carried boots to collect donations.

After people donated, they were given an MDA sticker.

One part that has stuck out to him, he said, is the kindness and the thank yous that motorists have given to the firefighters.

He said he hoped the donations will continue to increase each day. 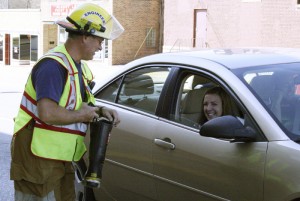 Last week, Schallock issued a friendly competition between Albert Lea and Austin for the campaign.

In the three days of fundraising last week in Austin, firefighters collected more than $16,000, which is their highest amount ever raised.

Last year they raised $14,000, making them one of the most successful stations per firefighter in the upper Midwest.

All donations made stay local, supporting area families with equipment, supplies, specialty clinics and support groups. Seventy-six percent of all money goes directly back to families; 15 percent goes toward education and 9 percent goes toward fundraising.

MDA has partnered with the International Association of Fire Fighters since 1954 for the fundraiser, and in 2009 alone, firefighters across the country raised more than $28.1 million to support research, clinics, support groups and summer camps, according to a press release.

In Albert Lea, the department has collected more than $21,000 for the cause in its eight years since inception.

To learn more about the Muscular Dystrophy Association, visit www.mdausa.org.