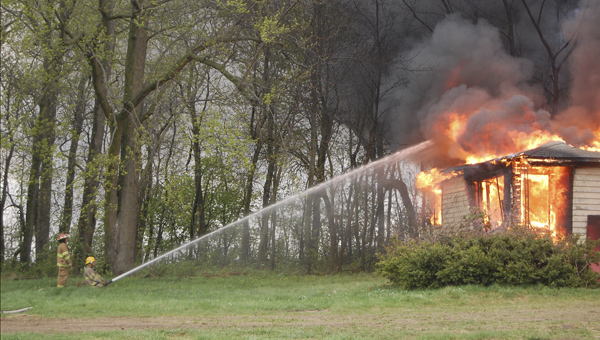 An Albert Lea firefighter sprays water onto an abandoned house that was on fire on Crossroads Boulevard during a training session in April. Firefighters intentionally lit the house on fire in multiple areas and then afterward they were able to use their skills to determine how and where the fires started. This and other photos from the training are on display at Albert Lea City Hall through the month. -- Photo courtesy Cheryl Herold

A few months ago, Albert Leans Cheryl Herold and Mitch Pederson had the opportunity to take part in something they described as an honor.

With cameras in hand, they got an inside peek into the training of Albert Lea firefighters.

Feeling the heat of the flames on their faces at times, Herold and Pederson said they witnessed not only the technical aspect of firefighter training, but also the camaraderie, humility and devotion that each firefighter displayed.

What they captured on their cameras is being presented on the walls at Albert Lea City Hall through the end of August.

The gallery, titled “Hometown Heroes — Our Firefighters,” shows the sometimes grueling task of putting out a blaze but also the lighter moments of one firefighter looking out for another. 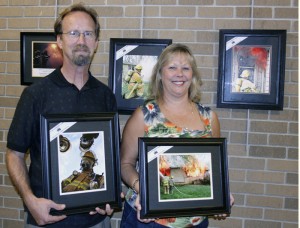 Mitch Pederson and Cheryl Herold, members of the Lens & Shutter Club, stand with a few of their photos of Albert Lea firefighters that are on display at Albert Lea City Hall through the end of August. The two photographers are calling their gallery “Hometown Heroes — Our Firefighters.” -- Sarah Stultz/Albert Lea Tribune

The training happened at an abandoned house on Crossroads Boulevard the second weekend in April and again a few weeks afterward.

The first week, the firefighters intentionally set the home on fire in four areas, to give others the experience in detecting how and where a fire started.

“The part that amazes me is how quickly a home can burn to the ground,” Herold said.

She noted she cannot imagine being a firefighter and having to go into a home on fire at night when it is dark, not knowing the layout of a home or who might be inside.

She can still recall the sound of the glass in the windows cracking from the heat.

“To hear the glass crack was just an eerie sound because you knew something bad was to follow,” she said.

Never once did the firefighters complain about the heat or the smoke, she noted.

Pederson said he got to see two faces of the firefighters during the training: One of the guy next door — a neighbor — and the other of a true firefighter who is battling an emergency.

Herold and Pederson said they hope their photographs will help give the families of the firefighters a better view of what their loved ones do.

Because it was only a training session, they can look at these photos and be proud of them, without associating any kind of bad memories with them that might accompany a real blaze.

“It was fun shooting those guys,” Pederson said. “It’s a good bunch of guys.”

The photos show various scenes of the training, including firefighters resting from a blaze, them walking straight into a fire, and then them putting a blaze out from a distance, too.

A respiratory therapist at Albert Lea Medical Center, Pederson said he has been involved with the Lens & Shutter Club for about six years.

The club rotates through its members for gallery space at City Hall.

Herold said she first got interested in photography when she was 6 and her parents gave her a film camera.

Her father was a watercolor artist, so she would tag along with him out in nature.

“A lot of the things I enjoyed from photography were what he enjoyed in nature,” she said.

In college, she was always the person to have a camera and enjoyed taking candid shots of friends and their weddings.

She said she joined the Lens & Shutter Club a couple years ago. Though she was intimidated at first, she decided to take the opportunity to learn.

Since, she’s learned numerous skills from others in the club, she noted.

She’s spent time in freezing temperatures just to capture 100 trumpeter swans over a frozen pond this past March and has stood for 20 minutes waiting for a groundhog to look at her.

“Eventually, I got a great shot with him looking at me with a huge mouth full of leaves,” she said.

During the work day, she enjoys taking cosmetic photography pictures of dental patient’s smiles before and after cosmetic improvements at the Albert Lea Dental Clinic.

Herold serves as a board member to the club as a judging coordinator, and Pederson serves as the coordinator for the City Hall photography display.

When: through the end of August