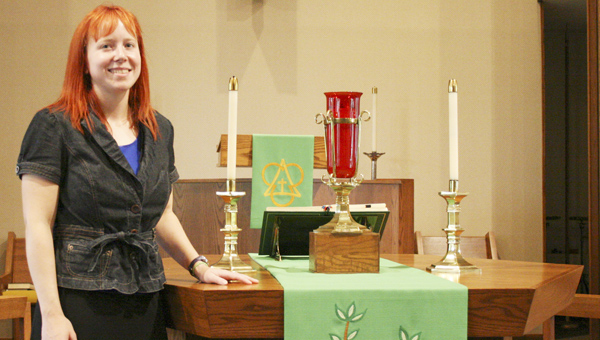 From South Dakota to South Africa, 30-year-old Katie Fick has not gotten a chance to settle down in a while. This month, however, Fick hopes she has finally found a home in Albert Lea — that is until she finds her second calling.

Her first calling came four days after being ordained in the Lutheran church when Fick became the pastor of two local churches.

Fick was ordained July 11 and submitted her paperwork to the Evangelical Lutheran Church in America (ELCA) in order to be placed in a church. Her preferences included southern Minnesota for a location because her family is from the area, and her husband, Norbert Fick, is a computer programmer who must make a commute to the Minneapolis-St. Paul area. The ELCA exchanged Fick’s paperwork with the Hayward and Trondhjem churches. After both parties thoroughly reviewed each other, the two churches extended an invitation.

“We put a lot of thought and prayer into the decision and decided that this is my first calling,” Fick said.

As of July 15, Fick is the pastor of Hayward and Trodhjem Lutheran churches. Fick replaced their interim pastor, Dick Spande, who had taken over when the Rev. John Malm stepped down.

“The people here are really warm and welcoming and excited to have a new pastor,” Fick said. “They really care about their churches; it’s an important part of them.”

Fick grew up in Wells where she graduated high school from United South Central. Afterward she attended Augustana College, a Lutheran college in Souix Falls, S.D., where she majored in music and minored in religious studies. Fick’s major was a voice major, but she does play piano and a some organ. She took up learning the guitar six months ago but it remains what she calls a “closet habit.” Fick said she grew up in the church and always loved music, so her early intentions were to become a music director at a church.

“I didn’t think I was going to be a pastor because they worked too many hours,” Fick said.

Once out of college Fick worked in a church office for four years. During that time she saw what the pastor of the church did and decided that was her calling.

“It was the things they did like leading worship, Bible studies, the way they could be with people,” Fick said.

Fick decided to attend seminary in 2006. Fick laughed as she said seminary was very busy. Not only did she take classes in church history, but also Greek and Hebrew. Her first year in seminary, Fick was required to do a cross-cultural course, which involved her traveling to South Africa for three weeks.

Fick said it was a life changing experience for her and she loved to see how God works in such a different place. Fick was required to fulfill an internship as a chaplain and did so at a long-term care facility. She also completed a year-long internship at a congregation as a pastoral intern.

“I was able to become very close with people going through the same thing I was,” Fick said. “It was very fun and exciting.”

Fick said being a pastor is something that suits her. Not being tied down to an office is something she enjoys. Fick is always out visiting congregation members, in church meetings, doing worship or preparing sermons.

“Doing different things all the time really appeals to me,” Fick said. “When the day starts you never know what you’ll end up doing.”

Some new things Fick wants to accomplish in the church include the creation of a Sunday school program for Hayward. She also wants to eventually get more adult education going in the congregation and create Bible studies. Fick is planning on talking to people in the church about what they would like to do for each of these projects.

“I want to visit as many people in this and the Trondhjem community as possible,” Fick said.

With two services on Sunday mornings to attend, Fick finds there isn’t time to socialize with her congregations as much as she would like. To remedy this, Fick is personally visiting the homes of those attending the church.

Fick said being pastor for two churches is a new challenge for her because they are very different. However, she said she also enjoys that aspect, and it’s fun for her to find the ways they are connected. Hayward and Trondhjem churches are also in a cooperative with Oakland and Moscow churches, and one of Fick’s goals is to strengthen the partnership. Fick said she’s excited to do this at the vacation Bible school being held from Aug. 16 to 20 for the four churches.

“I know I’ll make mistakes, but I have the gift of time. If a sermon isn’t perfect I can try again next Sunday,” Fick said. “I trust God reaches people when I’m not perfect.”