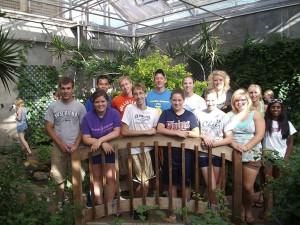 The last full week of July offered 36 students and five advisors from eight southeast Minnesota schools the chance to study agriculture in the state of South Dakota. Thirteen of the students were from Glenville-Emmons High School and were advised by Mrs. Angie James.

Monday, July 26, was the official first day of class this summer. With all 36 students on the bus, the group headed out to McCrory Gardens and the South Dakota State University’s Dairy Bar in Brookings, S.D. McCrory Gardens is a teaching and research space for students and visitors to SDSU to learn about native plants and how to grow them. At the Dairy bar, they learned how they make ice cream. They saw step-by-step how raw milk is transformed into a frozen treat, which they later got to sample.

Early Tuesday morning, the group had the rare opportunity to view the Sertoma Butterfly house in Sioux Falls before the general public was allowed in. The butterflies were in an environment suited to their life’s needs and were allowed to fly among the group freely. Then they visited Genex Dakota Sire Service, just outside of Mitchell. Genex provides CSS approved semen for domestic sales all around the world. The last stop for the day was “the one and only” Corn Palace, in Mitchell.

Wednesday was a busy day that started at the Kimball Popcorn Ball Factory. There, the group got to see how to make the best tasting popcorn ball around and met David, one of the factory’s founders, who was truly passionate about his business. Then they continued on to the Happy Hydros Tomatoes hydroponic greenhouse to see how to grow tomatoes and cucumbers without a true soil compound. And as they continued our tour across South Dakota, they made a stop in the Badlands National Park to learn about the geology and climb on some of the rock formations.

On Thursday the students visited the Cleghorn Springs Fish Hatchery where they were able to see the step by step process of raising salmon and trout from embryos all the way to adult fish. The next stop was Custer State Park. There they talked with two foresters who showed them how to measure a tree’s height and how to find out its age. The group stopped at Sylvan Lake for a picnic lunch, but everyone was excited to go to Mount Rushmore. Mount Rushmore was beautiful, even though the weather was drizzly, and it was the perfect last stop for the trip before the group spent all of Friday on the bus as they made their way across South Dakota back home to Minnesota.

The students would like to thank everyone who helped provide this wonderful opportunity for agricultural education. It was very rewarding and a great educational experience for them. The students of Mrs. James’s “Ag in Motion” class thank you for everyone’s contributions!