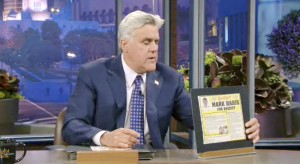 This screengrab shows Jay Leno placing Mark Harig’s ad on a stand for a TV camera to shoot.

A campaign advertising blunder promoting Freeborn County Sheriff Mark Harig made it onto the “The Tonight Show with Jay Leno” Monday night during Leno’s time devoted to headlines.

Leno read the first line of Harig’s campaign letter to voters from the Freeborn County Shopper, which inadvertently used “lawn” enforcement instead of “law” enforcement.

It reads: “Dear voter, My 37 years of lawn enforcement experience …”

“It certainly was never intended to say lawn, but when you read it, it’s funny because it sounds so funny,” Harig said.

Harig said he was e-mailed the ad to look over but he didn’t catch the error. He said he didn’t think anyone meant any harm, and it was just a simple mistake.

“When you look at it, it’s ridiculous and funny, and I have to laugh at it myself,” Harig said. “If you can’t laugh at yourself once in a while, what more can you do.”

Harig is seeking re-election for sheriff against challenger Bob Kindler.

The video can be found here.