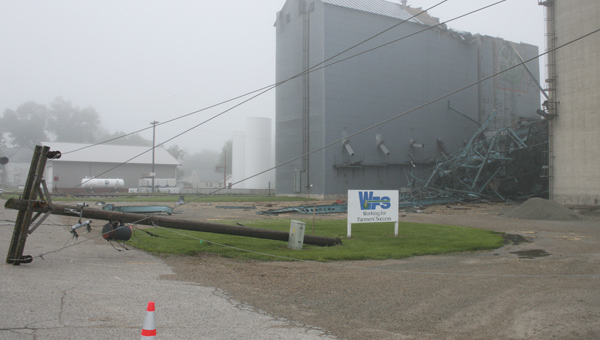 HARTLAND — The Hartland grain elevator located on Main Street was severely damaged by the wind storm on June 25.

According to Todd Ludwig, president of the Truman-based Watonwan Farm Service, to which the elevator belongs, there was several hundreds of thousands of dollars worth of damages. The roof and superstructure attached to it was blown off, damaging the rest of the elevator as it fell. The winds also shifted the entire structure from its original position.

“Our first thought was to confirm no employees, customers or townspeople were hurt or in harm’s way,” Ludwig said.

According to Ludwig, the elevator and crib woodhouse was constructed out of stacked dimensional lumber that was covered with tin. Ludwig said the construction design was common in the early ’70s when many of those elevators were built. However, because of the antiquated wood building material, Ludwig said the entire structure is going to be demolished.

“It was a wooden structure, so it was a complete loss,” Ludwig said. “They don’t build that kind of structure anymore.”

Ludwig said whether to rebuild would be determined after the demolition, which is being done by Maac Inc. of Montevideo. According to Ludwig, repairs are going to be made to the two cement silos located near the elevator.

“The two silos we’ll be able to utilize in time for harvest,” Ludwig said.

The cleaning effort ran smoothly as the heavy metal siding and wood debris landed in the immediate vicinity and did not get blown to outlying fields or the town itself. There were soybeans being housed in the elevator that a vacuum truck was able to come salvage, and they were brought to market. In the meantime, Ludwig said area farmers can use other facilities in the area like those in Wells or New Richland.

“It’s only a minor inconvenience,” Ludwig said. “That elevator didn’t do a tremendous amount of volume.”