He survived a twister 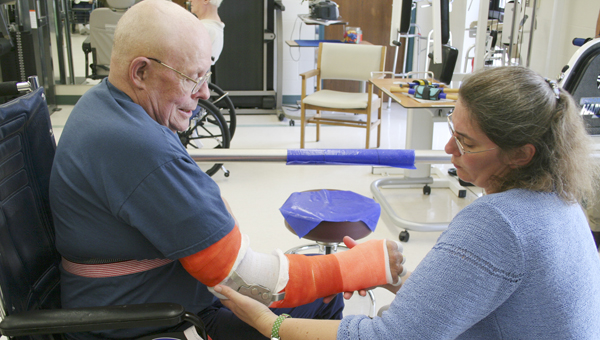 Spend five minutes with Armstrong resident Ron Woodside and you’ll come out inspired for a lifetime.

A survivor of the June 17 tornadoes, Ron, 77, is recovering in the transitional care unit of Good Samaritan Society of Albert Lea.

Doctors are calling him a miracle.

He and his wife, Kathy, were in their home the night an EF4 tornado swept through Freeborn County.

From their experiences, Ron received 27 broken bones and Kathy, 67, ultimately died. Their home was destroyed. 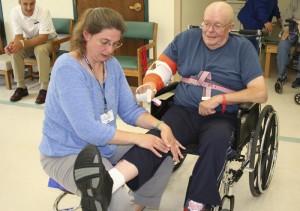 “It was an experience like no other,” he said, as he recalled that night. “I didn’t have time to be scared. I was scratching for life the best I knew how.”

Ron said earlier on June 17 he and Kathy had heard there was some bad weather coming to the area. His stepson and others called, telling them to get out of their house — which was a trailer — because they did not have a basement.

“I went and looked out the kitchen window and there was nothing hardly,” Ron said about potential tornadoes. “We said we could make a run for it if we saw funnels in the distance.”

Then the sky started getting grayer near one of his barns but he and Kathy just thought it was rain, he said.

The next thing he knew, he said, “I’m standing there looking at the walls and they’re coming right at me.

“The wind no more than got up to the house, then the kitchen started caving in and away we went. It was a tremendous force.”

As soon as that happened, Ron and Kathy were knocked to their floor — with all sorts of tables and other belongings surrounding them. 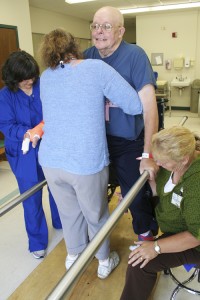 From left, physical therapist assistant Linda Enser, physical therapist Ann Harveaux and therapy aide Deb Hayes assist Ron Woodside as he stands from his wheelchair onto his right leg. He cannot yet apply weight to his left leg, which is wrapped in a cast featuring Twins memorabilia. -- Sarah Stultz/Albert Lea Tribune

“That was the last time I saw her,” he said. “I remember seeing her sliding past me. We were being swept out.”

He said the wind picked him up and sat him back down many times for a total of about 75 yards. He “bounced” into the ditch in front of their home, at 69509 220th St., across the gravel road and down into the ditch on the other side.

That’s where he and Kathy were both found by local residents checking on neighbors and by first responders.

He was taken by ambulance to St. Marys Hospital in Rochester and was in and out of consciousness for six days. Kathy died.

He had 19 broken ribs, along with broken collarbones and shoulder blades. He dislocated his elbow and got rotator cuff damage in one arm. One leg also had nerve and tendon damage. He was put on a ventilator for a while and had a tracheotomy, but ultimately was released from the hospital after only five weeks to move into rehabilitation.

“Everybody that I’ve talked to said it’s a miracle of a lifetime,” Ron said. “Very few people would survive that.”

He found out Kathy died about eight days after he went into the hospital, he estimated.

“Just what I needed was her,” he said about their relationship.

The couple had met at work, she was on nights and he was on days. Their time overlapped.

He found out she was single and asked her to go out to dinner.

“We were good for each other, we really were,” he said. “We were with each other all the time.”

He introduced Kathy to hunting and it became one of her passions as well. 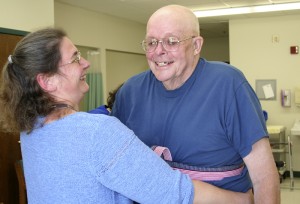 Ron said he’s a recovering alcoholic and she helped him stay that way. At one time they both also smoked, but they quit together.

Most recently they worked at the Albert Lea Tribune together in the mailroom inserting advertisements into the newspaper and assembling the sections.

“We had a good life,” he said through tears.

She had two sons; he had three sons and a daughter.

He said he hasn’t had the opportunity to fully grieve her loss yet because he’s had so many other changes to deal with. He hasn’t even seen the land where his home used to be or pictures of the devastation for that matter.

But he knows the response he has received from people after the tragedy.

“Of course, I didn’t see it, but there were all kinds of people out there helping me get cleaned up,” Ron said. “The response was enormous.

“As I got older I had lost a lot of my faith in the community, but this renewed it,” he added. “I just want to thank everyone in the community for their kindness and response. It’s just amazing. I’m so happy to live here.”

For now, he’s focused on improving his health and rising above his physical limitations.

He attends physical therapy sessions most days of the week and is looking forward to the day his casts on his arm and leg will come off.

“What’s bad is the pictures,” he said. “The personal stuff I collected over the years — to imagine this is it. This is all I’ve got.”

He does not know if he will rebuild on his land.

“As far as what I’m going to do, everything is up in the air,” Ron said. “As long as I’m physically able, I’ll be by myself.”

He said “nobody likes failure,” and his physical therapists said he has already made great strides since coming to Good Samaritan Society. During one of his sessions last week, a few other residents commented on how well is recovering.

He hopes to be up and walking again by the first of October.