“Everything is nearly copacetic. I had a scare this morning. I looked in my bed and I wasn’t there. I was worried that I had disappeared. Thank goodness for that mirror. If money carries a lot of germs, I should be the healthiest person in the state. It’s not because I’m lazy. I’m not afraid of hard work. There’s always a way out of it. My garden is so bad this year that the scarecrow looks better than I do. I had to go fishing to keep me fixed for vittles. I caught a mess of catfish.”

“I use mice for bait. I took my son, Six And Seven-Eighths, to get a haircut yesterday. I don’t know if he needed one, but I wanted to see what was under there.”

“How did you ever come up with the name Six And Seven-Eighths?” I ask.

“I just pulled it out of a hat. I asked him to refill the salt shaker. It took him two hours. He said it wasn’t easy stuffing salt through those little holes. Despite everything, I felt a glow today.”

“Change of attitude?” I wonder aloud.

“No, I stopped to smell a flower and inhaled a lightning bug.”

Noah would have been proud

Tom Benson of Hartland told me that after a severe thunderstorm, he found a dead wren. Tom said that it looked like the tiny bird had drowned close to a birdhouse nearly completely filled with sticks.

It’s apparent to me that the wren was trying to build an ark.

I had just resumed speed after stopping in an attempt to take a photo of a young turkey vulture perched upon a mailbox. I don’t even want to guess what kind of letter had been delivered. I soon slowed my vehicle again because on the gravel road ahead was a raptor. As it flew at my approach, I could see that it was a Cooper’s hawk. This accipiter hunts from ambush or by low, twisting flights at high speeds that take advantage of landscape features that hide the approaching hawk from its prey until the last moment. Cooper’s hawks take prey on the ground, in flight and in trees. They may pursue prey on foot into dense underbrush.

I spoke at a fundraiser in Heron Lake for the Prairie Ecology Bus Center. The PEBC, headquartered in Lakefield, has been operating since 1994, serving over 20 counties. It is more than a classroom on wheels. It offers teacher training, after-school programs, and learning from nature in ways that captivate children. On Sept. 11, from 10 a.m. to 4 p.m., PEBC is holding its Annual Prairie Winds Kite Fly at Jackson Municipal Airport. The free event will display show kites from five states, kite making for kids, music and more. For information, call 507-662-5064. 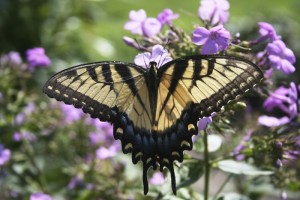 “What are the spiky things I am seeing on oak leaves?” These cool looking structures are hedgehog galls that appear on white oak leaves as spheres with spines. Inside, cynipid wasps are developing. The galls range from 1/4 to ½-inch in diameter and are yellow to orange to red in color. They cause no significant harm to the tree. No controls are recommended. It is estimated that there are more than 700 different kinds of galls that may be found on oak trees.

“What is heat lightning?” Heat lightning is the light from a distant thunderstorm that is located too far away for the thunder to be heard. The term “heat lightning” comes from the fact that the effect is most often seen on warm, humid nights during July and August. When the sky is hazy, as is typical on sultry, summer nights, the light from thunderstorms is reflected from a layer of haze into the night sky.

“My grandfather called one bird the ‘big cranky’ and another a ‘dump duck.’ What kind of birds are they?” Big cranky is the great blue heron. It has more nicknames than the NFL. Others include blue crane, gray crane, long john, poor joe, grandfather, and shitepoke. The dump duck is a gull, so called because of its fondness for landfills.

“Do we have 17-year cicadas in Minnesota?” The cicada is the vuvuzela of the insect world. The dog-day cicada calls from early July into September, the hottest part of summer, known as the dog days. Its high-pitched, long-lasting, whining song resembles the sound of a distant saw. Periodic cicadas, famous for emerging in huge swarms in the central and eastern United States, don’t live in Minnesota. They live 13 or 17 years (depending on the species) underground. Some people call cicadas “locusts,” but they are not. The confusion happens because locusts, a kind of grasshopper, sometimes show up in tremendous swarms, and early settlers thought the noisy cicadas were related. Locust swarms are destructive. Locusts devour crops, while cicadas feed on plant juices and do only minor damage to trees.

A male house wren will build up to a dozen nests. The female chooses the one she wants and then takes a couple of days to remodel the nest.

Douglas Adams said, “If it looks like a duck, and quacks like a duck, we have at least to consider the possibility that we have a small aquatic bird of the family anatidae on our hands.”

In summer, a mallard drake molts from its bright breeding plumage into muted brown feathers that makes it resemble a female. The subdued colors aid in camouflage to keep the duck safe from predators. The sexes can be told apart by their bills. The male has a dull yellow bill and the female’s is orange, marked with black. If you hear quacking, it’s the female.

I worked with Geri for many years. She was wonderful. I will miss her.

Please join me as I host cruises on Albert Lea Lake on September 5. It’s a great lake even if it isn’t a Great Lake. Call 383-2630 for information.

“A woodland in full color is awesome as a forest fire, in magnitude at least, but a single tree is like a dancing tongue of flame to warm the heart.” — Hal Borland