Help the Murtaughs with medical expenses

Scott Schmeltzer, Thanks for Listening

My friend Geri Murtaugh has cancer. It is the second time Geri has had to battle cancer in the last three years as two years ago she had to have a mastectomy because of breast cancer. This time her cancer is in her brain, spine, liver and pelvis.

Geri and her family — husband, Mike; daughters Erin, 14, and Tierney, 7 — are fighters, but we want to help them in their fight against cancer. We want to let Geri and her family know we love them, and so we will be hosting a silent and live auction on Sept. 16 from 5 until 8 p.m. at Wedgewood Cove Golf Course. This auction is to raise money to help offset the costs that the family has had since this diagnosis. 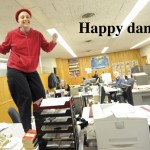 This photo of Geri Murtaugh hangs on the newsroom wall. Brie Cohen snapped it when Geri danced on her desk the day her work with the annual Progress edition was finished in February 2009. Geri began at the Tribune on Aug. 7, 1986, as Geri McShane. When she married, she kept McShane for her byline. Readers still knew her by both names.

We need your help in the donation of silent and live auction items.

Editor Tim Engstrom also will spearhead a putting challenge with a $10 entry fee. Bring your putters.

Anything you can do that would help us provide more funds for the family is welcomed. If you would like to help, please drop off or send your auction items to:

We also set up an account for anyone wanting to donate money directly. It is:

Thanks you so much for your generosity and help.