Hinder brings a taste of rock 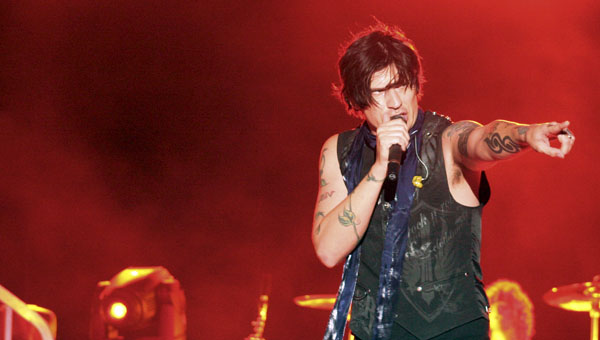 Oklahoma City-based Hinder rocked the Freeborn County Fair on Saturday, bringing in a full-house crowd for the fair’s only rock concert of the week.

The crowd filled the Grandstand and most of the pavement in front of the stage.

During the Grandstand acts of the days prior, people could reserve bench seats close to the stage; however, for the Hinder concert, the benches were cleared away and anyone who wanted could stand in the area closer to the stage. And that they did.

The nearby beer garden was also packed. 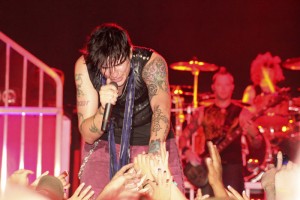 Austin Winkler, lead singer in Hinder, reaches out to fans during the band's concert Saturday at the Freeborn County Fair. -- Sarah Stultz/Albert Lea

Though the sound that came from the stage was a little different than what has been provided at the Grandstand in the past, the crowd showed their excitement for the change of pace as they waved their hands in the air, belted out lyrics and even jumped up and down at various times throughout the show. Many people were also snapping photographs.

The concert gave fair-goers — many of whom were 30 or younger — the opportunity to listen to three bands, including Hinder and the up-and-coming bands of Stereoside, out of Florida, and Bad City, of Chicago.

Stereoside began at about 7:30 p.m., followed by Bad City.

After these bands finished their performances, the crowd had to wait about an hour for Hinder. As time went on, more and more people began filling in the voids.

When Hinder finally came on stage around 9:20 p.m. singing “Up All Night,” the crowd roared. 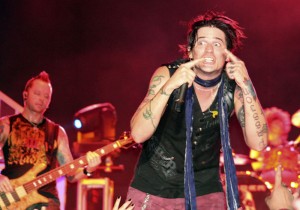 Members of the band Hinder got the crowd revved up Saturday night during the Freeborn County Fair. -- Sarah Stultz/Albert Lea Tribune

It was the band’s third show back from having eight months off the road. Because of that, Winkler said, he wanted to share some songs from the group’s new record, “The All American Nightmare.”

Then, they played the 2007 hit “Better Than Me,” from the band’s first album “Extreme Behavior.”

People in the audience waved their hands as the group played.

“That’s what we’re here for to have fun and make a lot of noise,” Winkler said.

After singing another song, the group played triple-platinum selling single “Lips of an Angel,” and people in the crowd raised their lighters and cell phones to light up the sky.

The group shifted into other songs, including “All American Nightmare,” the title track of the new album and “Without You” from their second album “Take it to the Limit.”

As they left the stage, the crowd chanted “One more song,” and the band returned, singing another new song. Hinder left the crowd with their debut single “Get Stoned,” which was released in 2005. The audience roared for the tune.

After being on stage for a little over an hour, members of the band threw a bunch of guitar picks and drum sticks into the crowd for the eager fans.

Hinder was started in 2001 by drummer Cody Hanson, guitarist Joe Garvey and singer Austin Winkler. It is now a five-member band, also including Mark King and Mike Rodden.

Freeborn County Sheriff Mark Harig said there were a few minor incidents where law enforcement was needed, but otherwise he thought the concert went well and the crowd behaved OK.

There were 22 deputies patrolling the show.