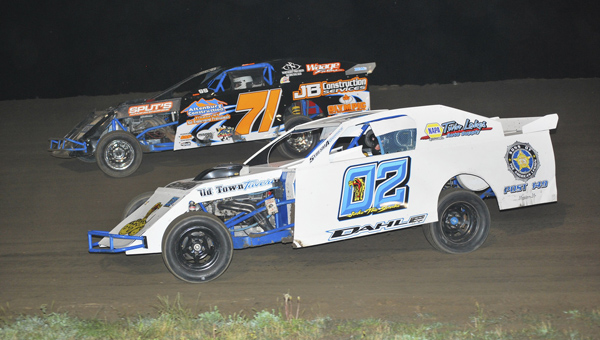 LANSING — Mother Nature dug into her bag of tricks again this week at Chateau Raceway. Early morning rains again made things a challenge to get the facility up to speed and ready for racing.

It misted right before start time, but the show went on from there. This week’s action was sponsored by, Misgen Auto Parts along with R&S Racing. R&S Racing gave the winners of the Pure Stock, Midwest Modifieds, Street Stocks and Modifieds coupons worth $50 from All Star Performance and R&S Racing.

The Misgen Auto Parts Pure Stocks had all sorts of issues with their main event. The first lap did get completed, but then two consecutive cautions slowed the pace. Matt Brooks led early with Brandon Shaner and Jason Newkirk close. Another caution on lap three brought things to a halt.

Newkirk would leave with a flat tire on lap four and rejoin at the tail. Meanwhile, the caution parade continued with two more on lap four and five. That would make five yellows and five laps were cut off the scheduled 15-lap race.

From then on, the race went to the checkered flag and Brandon Shaner won his second consecutive feature. Stacy Krohnberg was second with Adam Godeke, Brady Krohnberg and Dylan Nelson in the top five.

Shaner challenged Eustice for the lead, but Blowers spun in turn two on lap four and the caution flag was out. On the restart, Holland got alongside Shaner for second and they were right on Eustice who still led.

Shaner would spin in turn two and that collected Bobby Kilby and Jesse Stahl. When the race resumed, Kilby and Holland touched with Kilby losing several spots. Holland then challenged Eustice for the lead when he pulled even with him.

They had a spirited battle and traded some paint while Holland took the lead on lap seven. Holland would lead the rest of the way for his first win at Chateau in 2010. There were some post race activity that altered the final results.

Eustice was black flagged for unsportsmanlike conduct after the race. That handed second to Tyler Peterson. A.J. Zvorak was third with Ryan Goergen fourth and fifth went to Jason Barber.

The Farm Boy BBQ WISSOTA Midwest Modified feature had Troy Dahle, Cody Gardner and Dave Bjorge three wide for the lead on lap one. Bjorge nabbed the top spot while Greg Pfeifer Jr. got to fourth.

The driver on the charge was national point leader Brandon Davis. Davis shot to fifth on lap one and then battled Pfeifer Jr. for fourth. Davis zoomed past on lap three and then quickly closed in on Dahle and zapped by him in turn two of the fourth circuit.

Davis was not done because he also charged past Gardner for second in turn four when they completed lap four. Bjorge was still up front, but Davis blasted the top of the track and now raced for the lead.

Davis still used the topside of the speedway and took the lead when they came out of turn four on lap seven. A caution on lap eight would slow the pace of the race, but not Davis. Davis again took off on the restart while Gardner trailed in second. Pfeifer Jr. and Beau Lammers were locked in battle for third and they had a pretty intense race going on.

Davis cruised to his sixth win in a row and ninth overall at Chateau. Gardner finished second while Pfeifer Jr. and Lammers tangled on the final lap. They were both disqualified for rough driving and black-flagged. That moved Nathan Finley to third, Taylor Overbo fourth and Dahle to fifth.

Mike Madsen led the seven-car field in the Power 96/KQAQ IMCA Stock Car feature on lap one. Matt Speckman stole the lead on lap two. Speckman led until lap eight when Travis Shipman got by and extended his lead.

Shipman led the rest of the event for his first win of the season. Chris Adams worked his way up to finish second with Speckman in third. Dan Mackenthun and Merlyn Hegland rounded out the top five.

Jacob Dahle was the leader of the French’s Repair & Fabrication USRA Modifieds in the early stages. Doug

Hillson ran second while Josh Mattick was close behind him in third. Several yellow flags would keep the field tight.

Dahle was in control past the halfway point, but Jason Cummins made some noise when he showed everyone the topside was fast. Cummins started tenth and cracked the top five on lap 10.

Cummins continued his assault towards the front when he got by Joel Alberts for the fourth position. Another yellow on lap 12 slowed the field and again brought the pack back to Dahle’s rear bumper.

When the race resumed, Cummins again went upstairs and bolted by Mattick and Hillson and now was second. Cummins reeled around the top and pulled alongside Dahle for the lead. Cummins stole the spot on lap fourteen and stretched it out.

Cummins survived a couple of late race cautions to win his third of the season. Dahle was second with Hillson third. Mattick finished fourth and Todd Scharkey was the fifth place finisher.

In the S&S Auto Salvage Hornets, Jake Bigelow stole the win from Casey Trom when he took the lead in turn four of the last lap for his third win in the Junior class. Terry Blowers outdueled Gary Stahl for win number five in the Senior class.

Next Friday is fan appreciation night with $10 admission for the adults. It will also be Trick-Or-Treat night for the kids. Hot laps are at 7:00 P.M. with racing to follow.