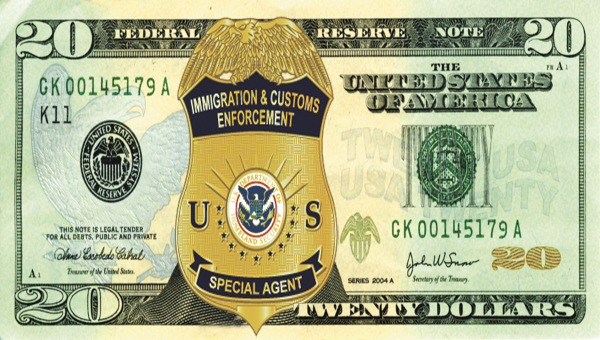 More than 100 people showed up for the groundbreaking of a $25.7 million addition to the Freeborn County Courthouse on Feb. 18, 2003. After a few years of heated politics, the community had come together to build what was to be called the Freeborn County Government Center. It featured a jail with a capacity to hold 122 inmates.

The county for more than a decade had been fighting the scourge of methamphetamine. It filled jail cells across the Midwest, and Freeborn County was no exception. In the old jail, inmates were sleeping on the floors. The new jail resolved the issue.

And the battle against meth was successful. The drug still is around, but not at the levels it once had been. By 2007, the county had a jail that had unutilized space. Housing inmates from other counties helped for a time, but soon that went away, too.

Enter the issue of illegal immigrants.

The federal Immigration and Customs Enforcement agency sought places to house people in its custody awaiting deportation trials. Sheriff Mark Harig and his staff approached county officials about a contract with the feds as a way to offset jail expenses and to retain staff. The Freeborn County commissioners unamimously approved a contract to hold ICE prisoners at a special meeting on March 20, 2009.

The service agreement Freeborn County has with the federal Immigration and Customs Enforcement agency has become a topic of interest in the Freeborn County sheriff’s race, and many residents don’t know much about it.

Much of the debate centered on whether “it” is profitable. Sometimes “it” to one candidate meant jail, while to another it meant the ICE contract. No wonder people were confused.

In the old days and in the modern era, it costs money to take away a person’s freedom of movement. In 2008, the jail cost the county more than $1.4 million. That figure is the net cost, calculated after adding revenue and subtracting expenses. The net cost includes all expenses, such as salaries, transportation, maintenance and depreciation. The revenue includes money received from ICE and any other income, such as reimbursements from other counties and grants.

In January of 2009, when it was not known whether ICE would come to the county, officials were preparing for both possibilities. County board Chairman Chris Shoff said local inmate numbers weren’t supporting the amount of staff in the jail and that the county was considering layoffs before the ICE contract was secured.

“In a time where money’s been tight, this has been helpful,” Helfritz said.

Another county in Minnesota has an ICE contract, although it’s a much larger facility. Sherburne County, north of the Twin Cities, has had an ICE contract since 1997. The facility has more than 600 beds.

“I couldn’t say how it would work for another county, but our budget shows we’re in the black on the contract,” Sherburne County Chief Deputy Scott Gudmundson said. “It’s been a win-win situation for us.”

Gudmundson said he doesn’t see a down side to the situation, and that the contract has not cost Sherburne County money. While not every county works the same, both Sherburne and Freeborn counties have recieved more income than has been spent on expenses for the ICE contract.

The Freeborn County jail — officially titled the Freeborn County Detention Center — is operated by the Freeborn County Sheriff’s Office. It can hold about 160 inmates, but the Minnesota Department of Corrections does not let the Sheriff’s Office house more than about 120 at a time. The limit is so that there are beds free if something unexpected were to happen. There are 18 cell blocks in the jail, and when women are in the jail they must be separated from male inmates in their own block. Because Freeborn County holds around four women at a time, officials decided to board the women elsewhere. It is an expense to house inmates in another county. Even with this cost, it is more profitable to fill 18 cell blocks with ICE inmates than leave around 14 cells free to house women in their own block.

One of the biggest concerns with the ICE contract is that it can be canceled at any time, by either party. Freeborn County or the feds could choose the end the contract by giving 120 days of notice to the other party. Another unknown is the number of inmates housed for ICE, because it depends on how many people have been detained.

Even with the unknown possibilities, county officials approved the service agreement and have seen the positive effects on the county budget. Though he didn’t want to speak for the whole board, Shoff thinks no one on the board would want to cancel the ICE contract.

“It’s a beneficial thing for the county and community,” Shoff said.