Is a rate hike justified? 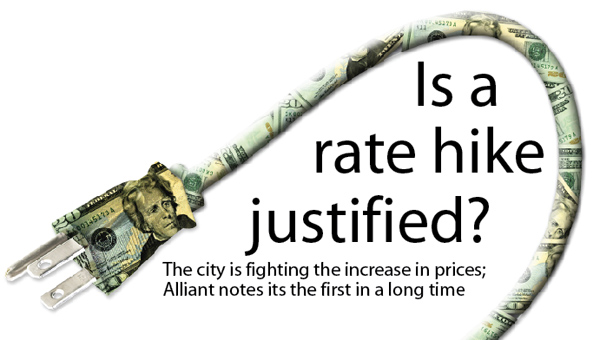 Residents and businesses in the service area of Alliant Energy in Minnesota may have noticed a difference in their electricity bills this past month.

The difference, part of an interim rate increase filed by the company, is expected to be included on the bills from the business at least through next summer.

It’s part of a case filed with the Minnesota Public Utilities Commission that asks if the rates should be changed permanently, and it’s already having a noticeable effect on many people in the community.

How and why did the change come about?

Alliant Energy spokesman Ryan Stensland encouraged residents to become educated on the case so they can make informed decisions.

On May 7, Alliant Energy filed its request with the Minnesota Public Utilities Commission to increase electric rates with customers in its Minnesota service area.

Stensland said it is the first rate case the company has filed in Minnesota in five years.

The current request was initially for $15 million, and because the company only has only about 40,000 members in this area, this has made the proposed percentage rate increase high.

He said the request will recover the investments the company has made in its Minnesota system during the last five years, including investments in power plants to reduce emissions, new wind farms to produce renewable power for customers and cost of service.

Stensland said in recent years Alliant Energy has made about $1 billion in investments into the Interstate Power & Light system in Minnesota and Iowa — investments that the company hopes benefit its customers in safety, reliability and environmental responsibility. This rate case only attempts to recover costs allocated to the company’s Minnesota customers.

“We’re not huge proponents of just raising taxes for the sake of raising taxes,” Stensland said, noting that the company has made substantial investments in areas such as Albert Lea, including in substations, the distribution of power lines and high power voltage lines.

After filing the rate case in May, Alliant Energy in July implemented interim rates that were approved by the Minnesota Public Utilities Commission for a total of $14.1 million.

The average rate increase is 20.1 percent, he said.

“We realize the timing isn’t perfect — there’s no good time to file a rate increase,” Stensland said. “But we’re also in a position now where we need to recover those costs.”

He encouraged customers to contact the company about ways to better manage their bills, if necessary.

He said Albert Lea is the largest community in Minnesota that Alliant Energy serves.

In reaction to the proposed rate increase, numerous entities have announced they will intervene in the case.

The city of Albert Lea is just one of those parties.

“We encourage those groups to participate in the process,” Stensland said.

The city is being represented by both the Minnesota Chamber of Commerce — who is covering 14 entities, including the city — and the lawyers of Flaherty & Hood, who are representing the Albert Lea city government. The goal is to seek a review and reduction of the proposed rate increase.

During the Aug. 9 Albert Lea City Council meeting, City Manager Jim Norman said city staff are estimating that the impact of the proposed rate increase would cost the city alone about $236,000 per year. A large hit would come because of the city’s wastewater treatment plant.

“Certainly the rates have an impact, both on the city’s operational costs — not only the general fund but also our enterprise,” City Manager Jim Norman said. “But additionally and even more importantly, it has an impact on our residents. For that reason, the city chose to get involved.”

The Albert Lea Port Authority has agreed to pay half of the costs associated with the legal representation, and part of the cost will come from the city’s enterprise fund.

Lawyer Steve Nyhus with Flaherty & Hood said the case is still in the early stages.

It has been assigned to an administrative law judge, and there was a pre-conference earlier this month to discuss some preliminary issues, he said.

At this point, different entities are submitting discovery requests.

In December, there will be three public comment hearings for customers to voice their opinions on the case, along with other discussion on Alliant’s quality of service.

“That’s an important part of the process,” Stensland said. “We recognize that not all of the comments are going to be positive, but that’s the only way the process can move forward.”

An administrative law judge and members of the Minnesota Public Utilities Commission will be in attendance.

Residents will receive a notice in the mail of the hearings during the last week in September and first part of November.

The Albert Lea hearing will be at Riverland Community College at 7 p.m. Dec. 9.

Then in early 2011, in February or March, the Minnesota Public Utilities Commission will hold an official evidentiary hearing, at which time all the parties who have intervened in the case can ask questions.

In the spring, the administrative law judge makes a recommendation to the Minnesota Public Utilities Commission. The commission will be required to make a decision by July.

“There will be things they agree on, things they don’t agree on,” Stensland said. “We anticipate somewhere down the middle.

Based on that decision, Alliant Energy will begin implementing new rates.

If the Minnesota Public Utilities Commission agrees to none or only part of the rate increase, users will be reimbursed for the difference in the interim rates charged plus interest.

To follow online with the case go to www.alliantenergy.com. People can also view updates on the Minnesota Public Utilities website as well.

Next:
A hearing on the Alliant rate hike will take place at 7 p.m. Dec. 9 at Riverland Community College in Albert Lea. An administrative law judge and the Minnesota Public Utilities Commission will be present.