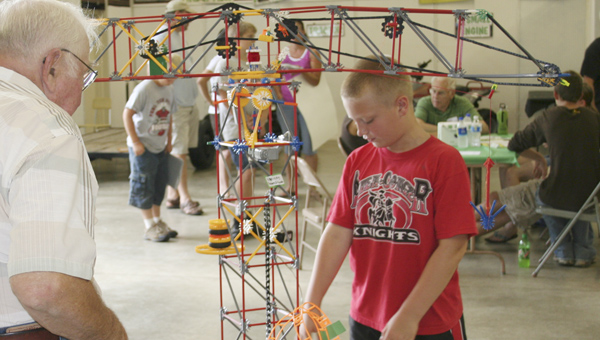 Arlon Fritsche, left, listens as Austin Attig explains his K’Nex crane in the 4-H Building on Monday at the Freeborn County Fairgrounds. Attig said it took him a full day to build the apparatus, and he tweaked it for eight weeks. -- Sarah Stultz/Albert Lea Tribune

Whether it was vendors setting up their concession stands, 4-H students entering their projects or Merriam’s Midway workers setting up rides, there was not one part of the fairgrounds that wasn’t busy.

“Come on out and have fun,” said Fair Manager Norm Fredin. 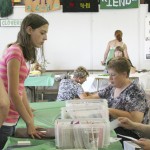 Kristen Hahn, center, registers her 4-H projects in the 4-H Building at the Freeborn County Fairgrounds on Monday. Hahn said her favorite project she entered was in the fine arts and crafts category. -- Sarah Stultz/Albert Lea Tribune

This year’s fair has several new events planned, including an alligator show, ventriloquist, comedy acts and sheep dog trials, among others.

“There’s something for everybody,” said Gordon Toenges, a member of the fair board.

In addition to the shows, there’s the five nights of entertainment at the grandstand, including Justin Moore on Tuesday, Love & Theft on Wednesday, Jo Dee Messina on Thursday, George Jones on Friday and Hinder on Saturday.

There are also numerous entertainment groups, including The Wendinger Brothers and Jennifer Ordalen, who will perform in Entertainment Square.

Daily live demonstrations of various arts-related activities are slated at the Creative Arts Building. People can view these demonstrations, along with entries, throughout the week for more old-fashioned fun.

Out of all of her projects, Hahn said her favorite was the one she was planning to enter into the fine arts and crafts category.

“We just love the fair,” added Shelley Pederson, who was entering numerous categories with her children in the Floral Hall on Monday.

She said usually she takes up three tables to showcase all the flowers she brings in to be judged, but this year the humidity, heat and storms limited that.

Pederson’s son, Marshall, who is going into seventh grade, was also submitting posters, flowers and horses to be judged. 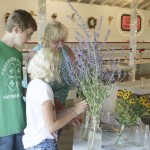 Shelley Pederson, back right, and her children Marshall and Carma Pederson set up flowers for judging in the Floral Hall at the Freeborn County Fairgrounds on Monday. -- Sarah Stultz/Albert Lea Tribune

“It’s fun, it’s exciting and there’s good food,” he said of the fair.

Pederson’s daughter, Carma, who is going into fifth grade, said she loves the rides at the fair and inviting her friends. She, too, was entering multiple projects.

Pederson said she thinks Marshall and Carma gain a sense of citizenship by participating in 4-H at the fair.

The 4-H building was busy with students entering projects.

One of those students was Austin Attig who was entering a K’Nex crane into the geospatial, robotics, computer and aerospace category that was taller than himself.

Attig said it took him a full day to make the project and he tweaked it for eight weeks.

Judge Arlon Fritsche said judges evaluate the project and try to find out what the child has learned to further his life in the process before awarding a ribbon.

To view more projects, stop by the 4-H building.

To view the complete guide to the fair, contact the fair office at 373-6965 or stop by.

General admission is $9 for children 10 and older and adults. Children age 9 or younger get in free.

Events were listed in the Tribune on Friday in a special publication. The fair’s website is www.freeborncountyfair.com.

There will be no award given out for a century farm during this year’s fair. No applications were received.