Funeral services for James Norman Frydenlund, age 98, of Hayward, who passed away on July 31, 2010, at St. John’s Lutheran Home, will be held on Wednesday at 10 a.m. at the Hayward Lutheran Church. The Rev. Katie Fick will officiate. Burial will be in the Greenwood Cemetery, in Glenville, followed by lunch at Hayward Lutheran. Visitation will be from 5 to 7 p.m. today at Bayview Funeral Home and one hour before the service at the church. 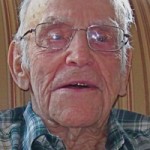 Jim was born on April 12, 1912, on the family farm in Hayward Township, the eighth of 12 siblings, to John and Nora (Alm) Frydenlund. He attended elementary school in District 36 and graduated from Albert Lea High School with the class of 1928. Jim lived on the Frydenlund family farm until age 97, farming with his brother Frank for many years, and with his nephew Vern after Frank’s death. Jim continued to assist with farm tasks, even into his 90s.

Throughout his lifetime, Jim was interested in sports of all types, particularly baseball. Jim was an excellent baseball player as a younger man. He loved to tell stories about the pre-World War II Hayward baseball team, part of an old Southern Minnesota League. Jim and his four brothers, plus two Frydenlund cousins, were all members of the team from tiny Hayward that beat St. Peter and made it all the way to the state tournament. Jim was an ardent fan of the Minnesota Twins. He was an avid hunter and hunted fox across the fields of Freeborn County with his brother Frank and a large group of friends. He was an excellent bowler and bowled in the Albert Lea Senior Leagues three times a week until a year ago.

Jim is survived by one sister Harriet Skaar and her husband Ashle of Hayward, sisters-in-law Camilla Frydenlund of Hayward and Helen Frydenlund of Saline, Mich., and 22 nieces and nephews. He was preceded in death by his parents, sisters Marion, Alice, Mae, Clara and Bertha, and brothers Vernon, Frank, Victor, Charles and Conrad.

Jim loved baseball, the farm where he lived his entire life, and his family. He was a kind, gentle and humble man who will be greatly missed by all who knew him.