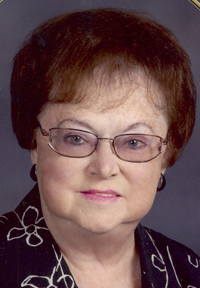 She was born Feb. 21, 1936, in Meriden Township the daughter of Daniel and Lucille (Sorenson) Fette. Janette graduated from Owatonna High School in 1954. She married Myron Standke Dec. 18, 1954, at Our Savior’s Lutheran Church in Owatonna. She farmed with her husband, raised her children and was a stenographer at Federated Insurance for six years.

Janette was a member of St. John Lutheran Church where she was active in Crusader’s Club. She was a member of Senior Place, a 40-year member of Izaak Walton League in Owatonna and a 50-year member of Crossroads Homemakers Club. Janette enjoyed gardening, playing cards and bingo, baking, painting dishtowels and spending time with her family at their northern Minnesota home in Outing and their winter home in Harlingen, Texas. She also loved socializing with her friends including the Hy-Vee Coffee Bunch, Church Birthday Club, the “Lunch Bunch,” Senior Place friends and “The Girls.”

Janette is survived by her son, Ron (and Jodi) Standke of Owatonna; daughters: Dinah (and Jeff Fjelstad) DeNamur of Albert Lea, Becky (and Gregg) Haas of Owatonna and Brenda Feyereisn of Northfield; grandchildren: Charles (and Erin) Elton, Devan (and Lucas) Brua, Jami (and Joel) Detlie, Jacob (and Jenna) Standke, Jim (and Rachel) Feyereisn, Jeffrey (and Ashley) Elton, Jesse (and Kelsey) Feyereisn, Patrick Standke and Collin Standke; six great-grandchildren; brother, Jim (and Carol) Fette of Annandale; sister-in-laws: LaVonne Meixner, Orvetta (and Harold) Schroeder, LaDonna (and Reuben) Ebeling and Arlene (and Ted) Sorenson all of Owatonna; brother-in-laws: John (and Beverly) Standke of Owatonna and Dale (and Susan) Standke of Morristown; and many nieces and nephews.