Funeral services for Joseph Francis Roche of Albert Lea, will be held at 10:30 a.m., Wednesday, at St. Theodore Catholic Church in Albert Lea. The Rev. James Berning and Deacon Mike Ellis will officiate. Visitation will be held Tuesday evening from 6 until 8 p.m. at Bonnerup Funeral Service, and one hour prior to the service at the church. There will be a scripture prayer service at 7:30 p.m. Tuesday evening at the funeral home. Interment will be in St. Theodore Catholic Cemetery. Military honors will be accorded by the Albert Lea area veterans groups. 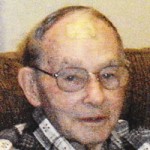 Joseph was born Sept. 13, 1920, the son of John D. and Mary (Houdek) Roche. He was a graduate of Albert Lea High School and the Dunwoody Institute. Joe served his country in the U.S. Army during WWll, stationed in Europe.

On June 19, 1948 he was united in marriage to Edna Schull at St. Theodore Catholic Church. Joe was employed as an electrician for over 46 years and owned and operated Roche Electric in Albert Lea.

Joe was an active member of St. Theodore Church and served as an usher, member of the finance council and building and maintenance committee and was an active volunteer. He was a member of the Knights of Columbus, American Legion, VFW and served on the board of the National Electrical Contractors Association. In his free time, Joe enjoyed golf, fishing and boating.

Joseph is survived by his wife, Edna, of Albert Lea; sons: Steven and his wife Marian of Albert Lea and Bob of Albert Lea; there is one daughter, Jeanne, and her husband Dale Tatarek of St. Louis Park; grandchildren include: Heidi, Whitney, Christian, David, Elaine (Joe), Christopher and Kelsey; one sister survives, Margaret (Leo) Hillsheim of New Ulm; sisters-in-law: Patricia Roche and Betty Roche of Albert Lea; nieces and nephews: Mary Rita, Patty, Mark and Michael.

Joe was preceded in death by his parents; sons: John and Tom; and brothers: Leo and Lawrence.