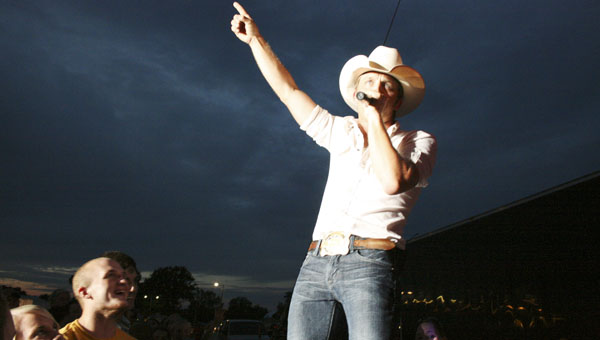 Justin Moore sings in front of the crowd at the Freeborn County Fair Tuesday night. He sang many of his own songs that he co-wrote as well as covers of other popular bands like Lynyrd Skynyrd. -- Kelli Lageson/Albert Lea Tribune

The first grandstand show at the fair did not disappoint fans. Justin Moore performed his country tunes Tuesday night at 8:30 at the Freeborn County Fair.

The show lasted about two hours, and fans were treated to songs from his self-titled album as well as songs the band is working on for their new album. Because he’s relatively new to the music scene, Moore wisely chose to include covers from other popular bands like Lynyrd Skynyrd and ZZ Top.

Moore started the concert with “Back That Thing Up.” He then asked the crowd if there were any country girls there, and he was answered with cheers. One song, “Good Old American Way,” ended with a few bars of the “Star Spangled Banner.” 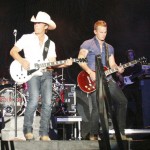 After a few songs from their current album, Moore tried out some songs that will be on their next album. Moore talked to the crowd in between songs and at one point said that in Minnesota he “knows about 99 percent of ya’ll are rednecks.”

During a more serious part of the show, Moore explained some of the family struggles he’s dealt with in the past year. He then played the slow tune “Grandpa,” which is about his grandfather and how he was raised.

The crowd sang along during a cover of Hank Williams Jr.’s “Family Tradition,” and seemed to enjoy it. Moore then left the stage to perform in front of the grandstand seating for two songs. After that he sang the popular song “Small Town USA,” which many people sang along to. He sang two more songs before leaving the stage. After cries for an encore, the band came back on to perform three more cover songs. 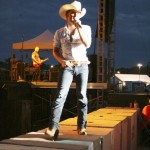 Justin Moore walks along the cement blocks surrounding the stage Tuesday at the Freeborn County Fair. Moore was the entertainment for the first night of the fair. -- Kelli Lageson/Albert Lea Tribune

Moore is from a small town in Arkansas called Poyen. He is a songwriter as well as country singer. He has released one album, the self-titled “Justin Moore,” which has had four top 40 singles on popular country charts.

Arguably his biggest hit has been the song “Small Town USA,” which reached No. 1 on Billboard charts, and his first single, “Back That Thing Up,” reached No. 38 on a country music chart.

Newer songs of Moore’s include “How I Got to Be This Way” and “Backwoods.” Moore earned a Country Music Television Music Award nomination for the breakthrough video of the year award for his song “Small Town USA.”

According to Moore’s Facebook page, he was interested in singing even as a small child. He was both a singer and an athlete in high school and moved to Nashville, Tenn., in 2002 after graduating high school. He said his influences include Willie Nelson, Charlie Daniels, Hank Williams Jr. and Waylon Jennings.

Moore is signed with Valory Music Company and released his first album in 2009. He will also be performing at the Iowa State Fair in Des Moines, Iowa, on Aug. 17.