Kay Bonner Nee, actress-writer-activist, passed away Aug. 2, 2010, after a brief battle with lung cancer at age 90. 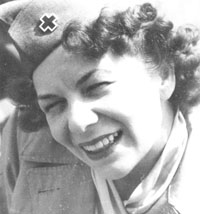 She is a graduate of College of St. Catherine, worked as an on-air personality at KATE Radio in 1943 and served in World War II with 5th Corps in Europe as entertainer with Red Cross.

She was a witness to the Holocaust and was a radio personality, actress, writer, director at WCCO-TV in 1950s, and an activist for peace and justice. Her sense of adventure, love of life and of humanity continue to inspire us.