The funeral service for Kenneth “Kenny” Ferguson of Albert Lea, will be held at 10:30 a.m. Thursday at Bonnerup Funeral Service, 2210 East Main, Albert Lea. Deacon Mike Ellis will officiate. Interment will be in St. Theodore Catholic Cemetery. Military honors will be accorded by Albert Lea Veteran’s Organizations. Visitation will be from 5 to 7 p.m. today at Bonnerup Funeral Service, and one hour before services. 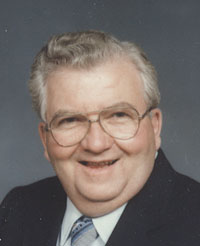 He was born on June 17, 1927, in Freeborn, the son of Earl and Elsie (Bendixen) Ferguson. He attended a one room rural school and Freeborn High School. He was a U.S. Navy Veteran of World War II, Pacific Theater.

He retired from Wilson Foods in 1983, at the age of 55, after working there for 37 years. He also helped his father farm.

After retirement, Ken and Marie wintered in Mesa, Ariz., until his health would no longer allow.

He was preceded in death by his parents, Earl and Elsie, and brother, John.

In lieu of flowers memorials suggested to the American Diabetes Association or St. Theodore Catholic Church.