The funeral service for Leatrice M. (Ashleson) Spilde, of Albert Lea, will be held at 11 a.m. on Friday at the Concordia Bear Lake Lutheran Church rural Albert Lake. The Rev. Gary Hanson will officiate. Interment will be in Bear Lake Lutheran Cemetery. Visitation will be one hour before the service at the church. Bonnerup Funeral Service is assisting the family with arrangements. 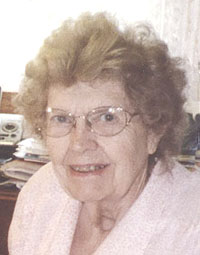 Leatrice Mae Ashleson was born July 10, 1928, on the Drommerhausen Homestead (as was her mother) in Pickerel Lake Township, Freeborn County, the daughter of Bennie and Esther “Vera” (Drommerhausen) Ashleson. Leatrice was baptized on Aug. 19, 1928, and confirmed Sept. 28, 1941, in the Lutheran faith at Bear Lake Concordia Church. She attended school District No. 57 and graduated from Albert Lea High School in 1946.

On March 23, 1947, she was united in marriage to Julius Spilde at the Bear Lake Concordia Lutheran Church. After marriage, they lived in Kensett, Iowa, for 11 months where her husband worked as a mechanic at the Ford Garage. In March 10, 1948, they purchased a garage and did auto repair in Twin Lakes. In 1965 they purchased a farm south of Twin Lakes and in 1975 purchased a home south of Albert Lea. Except for 11 months after marriage, she lived her entire life in Freeborn County and was a life member of the Bear Lake Church, and its womens organizations. She was a member of the auxiliary of the VFW Post 447 of Albert Lea and the American Legion Post 264 of Glenville.

Leatrice loved her God, family, church and country. Her interests were sewing, cooking, working with thread in many ways, gardening, genealogy, playing dominos and was a Twins fan.

Leatrice believed in the resurrection and the life eternal by faith through her savior Jesus Christ.