The national commander of the American Legion is coming to Albert Lea later this month.

Clarence E. Hill will address Legion members at the Marion Ross Performing Arts Center at 6 p.m. Aug. 24. The public is invited, with $10 donations being accepted that go to the Legacy Scholarship Fund.

The Legacy Run is organized by the American Legion and the American Legion Riders. The Riders are a motorcycle enthusiast assocation within the national Legion organization. There are about 106,000 Riders members. One well-known chapter in the Midwest is the Patriot Guard, which protects funerals of fallen soldiers from protesters. 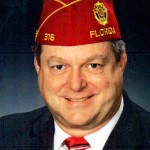 Hill will greet area post commanders and meet members of the press at 5 p.m. At 6:30 p.m., the Legion Riders arrive on Broadway Avenue. The Community Band will play starting at 5:30 p.m.

It is the first time the 17-year ride has stopped or gone through Albert Lea. The ride raises money for scholarships for children who have lost parents in the line of military duty.