The funeral service for Leona K. Severtson of Albert Lea will be 1:30 p.m. Monday at Trinity Lutheran Church, Albert Lea. The Rev. Curtis Zieske will officiate. Interment will be in Graceland cemetery. Visitation will be one hour before the service at the church. 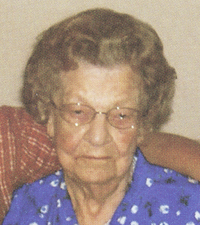 Leona Jorgensen was born March 4, 1921, in Freeborn, to Fred and Amanda (Hansen) Jorgensen. She attended Freeborn School and graduated in 1939 and then attended Minneapolis Business College. Leona was baptized and confirmed in the Danish Lutheran Church. Leona Jorgensen wed Val (Bud) Severtson in 1941, in the Alden Danish Lutheran Church. They celebrated their 50th wedding anniversary in 1991. To this union three children were born: Barbara, John and David. Leona was employed in the office of Wilson & Co., Albert Lea. Returning after raising a family to the Test Desk at the plant. Later, she sold real estate for Hellie Real Estate for 18 years. Leona was a member of Trinity Lutheran Church, VFW and American Legion Auxiliary, Senior Center and Sunbeam Mission Circle. She also enjoyed crocheting and making baby blankets for others. Leona belonged to several bridge and 500 clubs. Leona’s family was very important to her, especially her grandchildren and great-grandchildren. They were the highlight of her life.