Funeral services for LeRoy Richard “Rosy” Larsen, 83, of Albert Lea will be held at 10 a.m. Saturday at Trinity Lutheran Church. The Rev. Curtis Zieske will officiate. Interment will be at the Hillcrest Cemetery with Military Honors accorded by Freeborn County area veteran’s organizations. Visitation will be from 5 to 7 p.m. Friday at Bayview/Freeborn Funeral Home and one hour prior to the service at the church. To sign the guest book, go to www.bayviewfuneral.com. 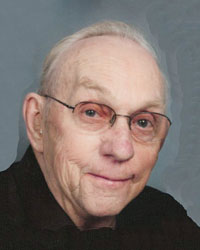 LeRoy Richard “Rosy” Larsen was born on June 6, 1927, to Carl and Christina (Sorenson) Larsen in rural Albert Lea. He grew up near Pickeral Lake Township and went to rural and Lincoln School. LeRoy was baptized and confirmed at Trinity Lutheran Church where he was a life member. He served his country during WWII in the United States Navy where he was stationed on the Princeton. LeRoy married Marilyn Ellis and to this union seven sons were born. One son died in infancy. The couple later divorced. On July 19, 1980, LeRoy married Berdena “Dena” Heemsbergen in Austin. LeRoy was employed as a stonemason, carpenter, and for Wilson & Co. and then Farmstead Foods. After retirement, he worked at the Hayward rest area. In his spare time LeRoy enjoyed fishing, camping and traveling. Spending time with his family and friends was especially important to LeRoy. He will be deeply missed by all.