Library cuts cause decrease in usage of books

During the first seven months of the year since more than $1 million in budget cuts went into effect for the city government, Albert Lea Public Library circulation numbers have decreased — but not as much as library officials expected.

During a budget presentation last week in front of the Albert Lea City Council, library Director Peggy Havener said it has been a turning-point year for the library.

With the facility open only five days out of the week — Sunday through Thursday — Havener said library staff are checking out more books per hour than in 2009. 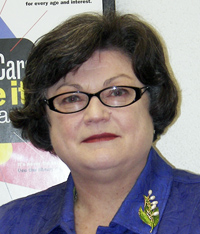 She noted she had expected circulation for the first seven months of the year to decrease by about 44,000 when library hours decreased from 55 per week in 2009 to 44 in 2010. But thus far, the actual circulation loss has been only about 14,000.

“It’s not anywhere close to what we expected,” she said.

Sundays have been extremely popular amongst library-goers.

She noted that staff have been stretched thin but are doing their best to serve the community. She said she appreciates that the community has been making the best of the schedule.

When the cuts went into effect, 79 staff hours were eliminated, so instead of having seven staff members to help in the library, there are now typically five at any given time.

“The staff’s tired, but they’re doing a great job,” she said. “They’re on the floor with customers 10 hours a day — that’s a long day — but we have to try to get as much access to the community as we can.”

She said the library budget is funded by both the city, at about $600,0000, and Freeborn County, at about $262,000. This means about 70 percent of the funding the library receives comes from the city and about 30 percent comes from the county. The Friends of the Library organization funds all children’s programs throughout the year, and the Library Foundation, through the Fountain Lake Bookstore, donates money toward updating the collection.

Other than an additional six hours of part-time pay to help alleviate the full-time staff to perform some of their other duties, Havener made no changes to her budget request for 2011.

The presentation was made as city staff begin formulating the 2011 budget.

Look to the Tribune this week for additional stories about the budgets of other city departments.