The funeral service for Lila E. Fisher of Albert Lea, will be 11 a.m. Friday at First Lutheran Church in Albert Lea. The Rev. Dan Baker will officiate. Interment will be in Hillcrest Cemetery. Visitation will be 4 to 6 p.m. Thursday at Bonnerup Funeral Service in Albert Lea and one hour before the service at the church. 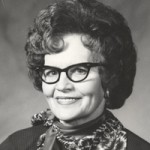 Lila was born April 9, 1911, at Hartington, Neb., to Nels and Matilda “Tillie” Nelson. She attended country school. Lila has lived at Des Moines, Iowa, Ottumwa, Iowa, and moved to Albert Lea in 1944. Lila married Vern Fisher on Dec. 23, 1939. She was a member of the First Lutheran Church. Lila worked at Bricelyn for a canning company, Land-o-Lakes and Wilson and Company for 25 years, retiring in 1976. Lila enjoyed playing the piano, walking, gardening, listening to the radio, music, cooking and baking. She especially enjoyed baking apple pies and having picnics by the lake. Lila had a strong faith. She liked helping others and being with her family. She would always bring her hammock to all family gatherings Lila was always telling people to enjoy life and have fun.