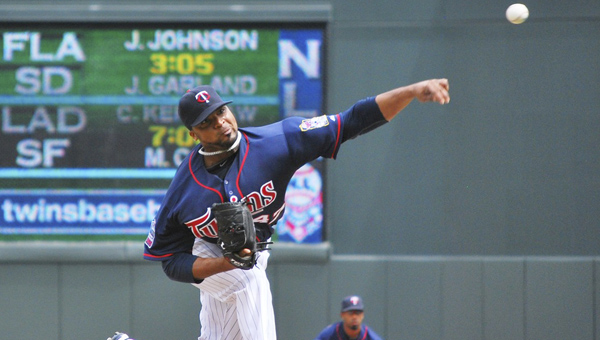 MINNEAPOLIS — Last year during this time, Francisco Liriano struggled, losing five of six games in late July and August and running his ERA to 5.80. This year, he’s only getting stronger.

Liriano tied a season-high with 11 strikeouts and threw his third consecutive seven-inning shutout Sunday, as the streaking Twins beat the Seattle Mariners 4-0.

“Mentally, he was beat up last year,” said Twins manager Ron Gardenhire about Liriano. “He’s settled into it now. He’s trusting the catchers, locating the ball a lot better and pitching.”

Liriano is 4-0 with a 0.31 ERA in his past four starts since getting rocked for seven earned runs in 1 2/3 innings against the Detroit Tigers July 9.

“It starts with your starter,” Gardenhire said. “He pretty much dominated the game out there.”

Through the first five innings, Liriano was dueling with Seattle’s Luke France, who was making only his second start of the season.

The Twins scattered just three hits through the fifth until back-to-back hits by Alexi Casilla and Delmon Young and a pitch that hit Michael Cuddyer loaded the bases with one out for Jason Kubel.

Kubel then turned on a waist-high fastball and hit it high off the wall in right field. Ichiro Suzuki played the bounce well but the relay throw never went home as Kubel cleared the bases with the three-run double.

Three pitcher later, Danny Valencia drove Kubel home, knocking French out of the game, but that’s all it took as a trio of Twins pitchers held the Mariners scoreless and struck out six through the final three frames.

“The bullpen came in and did very well,” Gardenhire said. “(It was) a clean game.”

The win was the Twins eighth in a row, and ninth in their past 10 games.

Much of the Twins’ resurgence is because of the consistent play of the starting pitchers, who are a combined 13-1 since the All-Star break after struggling during the first half of the season.

“If they go deep in the games and give us opportunities likes this,” said Gardenhire of his starting pitchers, “we can win ballgames.”

The starters will have to be solid as the Twins embark on a 10-game road trip, beginning with the American League Wild Card leading Tampa Bay Rays and ending with the Chicago White Sox, who are currently a 1/2 game ahead of the Twins in the AL Central.

Justin Morneau, who was sidelined with a concussion July 7, watched the entire game from the dugout Sunday, for the first time since the injury. There is still no date set for his return.

Joe Mauer did not play in the series finale because he received a cortisone shot in his aching right shoulder. He will be a game-time-decision to play in the opener against the Rays, but Drew Butera will catch regardless.