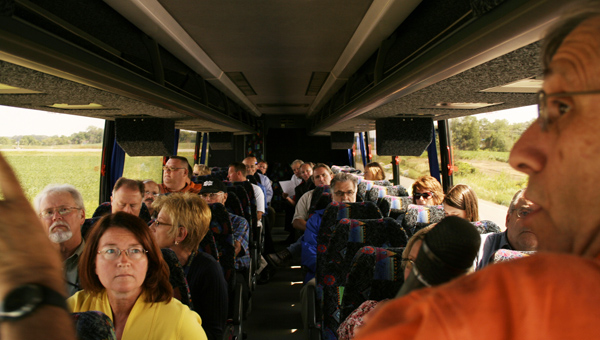 Of course, there wasn’t the time to see the entire area, so the tour, on a charted bus provided by Alliant Energy, stuck mainly to the Manchester area.

People met the wind farm director from Alliant Energy, Ted Francois, and construction manager, Tim Shugart, who both spoke during the tour. The tour took the group to the first few wind turbines that have been constructed, the substation under construction on County Road 29 and the ITC Midwest substation currently being constructed.

“They’re laying out pieces by each base,” Shugart said.

As the large pieces of each turbine arrive they are strategically placed near the pedestal so the crane has to do the least amount of lifting. Each site will get the following pieces attached to the pedestal: a base, a lower middle piece, an upper middle piece, a top piece, a nacelle and then a rotor holding the three blades. 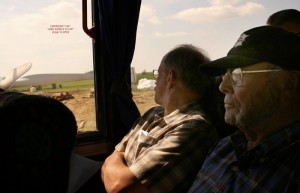 Freeborn County Attorney Craig Nelson looks out a window at wind turbine blades on the ground in the Manchester area during a bus tour Tuesday with local officials. With him is Phil Tennis, the drainage inspector for Freeborn County. -- Tim Engstrom/Albert Lea Tribune

The pedestal of each turbine is 15 feet deep and is cone-shaped in the ground. The largest part is 60 feet in diameter, and the entire pedestal has about 500 cubic yards of concrete, or enough to fill about 50 concrete trucks. He also said there are different ways in which turbines can be constructed.

“These are specifically designed for the soil here,” Shugart said.

Shugart explained that orchestrating where all the employees and trucks will be takes a lot of time and logistics planning. Certain processes of the construction can’t be done at the same time for safety reasons.

Each turbine will be connected to the substation on County Road 29 by underground cables. These cables will also connect the turbines to each other for information sharing. The cables are embedded about 60 inches into the ground.

All the turbines will collect meteorological information as well as figuring out wind speeds and direction. The blades of the turbine will swivel depending on the direction of the wind. Tuesday afternoon no turbines were being constructed because the wind was too high. Anything above 22 mph is too windy for construction.

Because of the Minnesota climate, the turbines in the Bent Tree Wind Farm are equipped with a winter package that includes a heating system. The wind turbines cannot self-generate power. They are constructed to send power to the substation, and consequently will have to be sent a small amount of power to run electronics in the turbine.

Francois spoke to the group about one of the biggest problems while making the wind farm, which is drainage tile being cut while construction happens. He said they’ve had a crew following all the construction fixing tile as they go, and there are plans to come back in spring next year to check tile again.

Shugart talked about some goals for the completion of the wind farm. He said he hopes to have some of the turbines operational by October. Then more and more will become operational in November, December, January and February. He also said winter weather doesn’t prevent construction, but that it does slow down considerably. He said people in the county have been nice to work with. He also said even after construction that Bent Tree Wind Farm will be a part of the county for many years.

“We’ll be here as your neighbor and as part of the community,” Shugart said. “The people here are very helpful.”

“They seem willing to work with them,” Brown said. “I’m very pleased that they’re on budget and on schedule.”

Brown also said the wind energy production taxes that will go to the county are greatly appreciated in a time when property taxes have been increasing. County Board Chairman Chris Shoff also attended the tour and said he thinks the wind farm is an exciting development for the area. He likes that the wind farm will create anywhere from 16 to 25 jobs when it becomes operational.

“One thing that wasn’t discussed was that the county will be receiving a production tax, which will be beneficial and another revenue stream for the county,” Shoff said.

The turbines are Vestas V82 and 1.65 megawatts. This wind farm project will amount to 200 megawatts, which can power approximately 50,000 homes. The total weight of each turbine is more than 350,000 pounds and the height with one blade straight up is 397 feet. The main crane erecting the turbines is more than 1 million pounds and has a 440 ton maximum lifting capacity. There’s been about 25 miles of access roads built in the county. Turbine components have been transported by freighter, railways and special trucks. The operations and maintenance center is located on Highway 13 in Hartland.

Anyone with questions about the project is encouraged to call Alliant Energy at 800-545-3122.