Funeral services for Loren “Bud” Waage, 94, of Ellendale, will be held at 11 a.m. Wednesday at First Lutheran Church of Ellendale. The Rev. Arne Halbakken will officiate. Interment will be at the First Lutheran Church Cemetery. Visitation will be from 4 to 7 p.m. Tuesday at Bayview/Freeborn Funeral Home and one hour prior to the service at the church. To sign the guest book, go to www.bayviewfuneral.com. 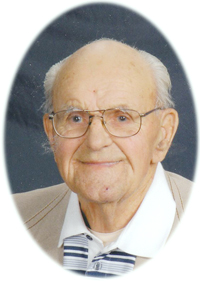 Loren “Bud” Waage was born on Oct. 1, 1915, to Erick and Tillie (Handeland) Waage in Radcliffe, Iowa. Loren grew up and attended school in Easton. On March 27, 1937, he was united in marriage to Betty Jean Anderson in Des Moines, Iowa. The couple moved from Des Moines to Albert Lea and Kiester before settling in the Ellendale area where they lived for the past 60 years. Loren worked at Wilson Foods in Albert Lea for 35 years. He was a member of First Lutheran Church in Ellendale, a Lion’s Club member for 39 years, and a member of the Full Gospel Businessmen where he had served as president. Loren loved watching the Vikings and Twins, fishing trips to Canada and he and Betty had spent many winters in Tucson, Ariz. He treasured the time spent with his family and grandchildren.