Lorraine Jeanette Urbain, 86, of Walters, died Saturday, Aug. 21, 2010, at Parkview Care Center in Wells. Funeral services will be held Wednesday at 11 a.m. at United Methodist Church in Wells. Visitation will be Tuesday from 4 to 7 p.m. at Bruss-Heitner Funeral Home in Wells, and will continue one hour prior to the service at the church on Wednesday. The Rev. Paul Woolverton is officiating and burial will be in Rice Lake Cemetery, Foster Township, Faribault County. Bruss-Heitner Funeral Home in Wells is assisting the family with arrangements. 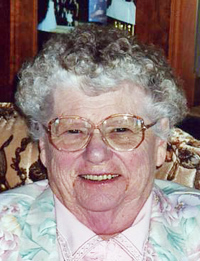 Lorraine attended country school District 107 and graduated from Wells High School in 1941. She was a farm wife, mother and homemaker. Lorraine was a member of the Birthday Club, Church Circle, Sunday School Teacher and PTA. She was also the financial and membership secretary for Rice Lake Church. Lorraine had a ceramic chicken collection, was the family historian and loved gardening, lawn care, putting photo albums together and traveling.

She was preceded in death by her parents: John and Dorothy Gerber; son-in-law, Terry Russell; father and mother-in-law: Jesse and Luella Urbain; sisters-in-law: Ethel (Norman) Steele and Arvilla (Clarence) Anderson.