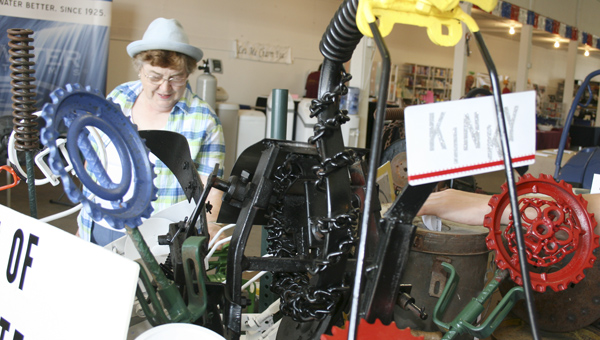 Leola Anderson looks at one of the entries in the Bucket of Junk Contest in the Commercial Building at the Freeborn County Fair on Thursday. Participants were each given a bucket with the same metal parts and then asked to make something out of them. -- Sarah Stultz/Albert Lea Tribune

The rules are simple.

Take a bucket full of pieces of scrap metal — what others might deem junk — and turn them into something worthy.

Participants can paint the pieces, weld them and even cut them, but the entrants must use every piece originally provided.

That’s the premise behind a new contest this week in the Commercial Building of the Freeborn County Fair.

Called the Bucket of Junk Contest, the creations are on display through Saturday at 5 p.m. when there will be an auction. Already they’re gaining rave reviews from fair-goers.

“Whoever did it had to have an imagination,” said Donna Stolaas, who was looking at the entries Thursday afternoon with Sylvia Johnson. “It’s out of this world.

“So many would have just thrown the junk away.”

Though the seven participants got the same scrap metal pieces, their creations were anything but similar.

Among the seven entries, there’s an old-fashioned barber’s chair, the “Chitty Chitty Bang Bang” car, a swan, a man watering flowers, a water mill, a figure that looks like a bug with antennas and wings, and a seventh entry simply called “Six Seventeen.”

Johnson and Stolaas remarked that they liked the swan, which also featured frogs, waves of water and lilypads.

“There’s something about the swan — it’s unique,” Stolaas said.

The creations all had to be welded or somehow glued together into one piece.

“It’s incredible that anybody can take a bucket of junk and be that creative,” said Paul Anderson, who was manning the Freeborn County Historical Society’s booth nearby. He noted he liked the barber’s chair.

Anderson’s wife, Leola, said she liked the swan and was thinking about coming back on Saturday to bid on it during the auction.

“The more you sit here and look at them, the more you’re amazed,” she said.

Six-year-old Carter Miller said he liked the entry called “Kinky,” because “it kind of looks like a bug.”

The public can vote on their favorites by ballot at the Commercial Building.

Together with a judge’s vote, the first-, second- and third-place winners will be determined.

Fair Manager Norm Fredin, who came up with the idea for the contest, said he’s pleased with how it has turned out.

“People enjoy it,” he said.

To vote on your favorite Bucket of Junk Contest entry, go to the Commercial Building at the Freeborn County Fair and cast a ballot.