The funeral service for Mary Elizabeth Kuyper of Chisago City, formerly of Albert Lea, will be held at 1 p.m. Sunday at the First Presbyterian Church in Albert Lea. The Rev. Dwight Netzer will officiate. 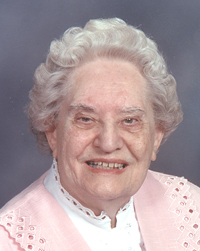 Interment will be in Graceland Cemetery. Visitation will be one hour before the service at the church. Bonnerup Funeral Service is assisting the family with arrangements.

Mary Elizabeth was born on March 23, 1918, in Omaha, Neb., the daughter of Albert A. and Helen M. (Dorn) Smith. As a young woman, she aspired to be a minister’s wife and met Gilbert Kuyper while he was in the Seminary in Omaha. On Oct. 26, 1941, they were married and they served in ministry together in Tekamah, Neb., Algona, Iowa, St. Paul, St. James, Superior, Wis., and Kasson. They retired to Albert Lea, where they were active in the First Presbyterian Church. Throughout her ministry she will be remembered as an accomplished pianist and soprano soloist. Her beloved Gilbert died in 1995, and in 1997 Mary Elizabeth moved to Chisago City.

She will be greatly missed by her son, John David Kuyper; daughter, Rena Benedict; grandchildren: Lance (Ame) Kuyper, Jason (Heather) Kuyper and sons: Logan and Colby, Gretchen (Dan) Fitzpatrick and their son, Bear, Tricia Alexander Gesierich and her children: Albert and Autumn, Jeremy (Naomi Farabee) of St. Paul; and other relatives and friends.

Waiting to welcome her home are her parents; her husband, the Rev. Gilbert Kuyper; daughter, Helen Evans; and brother, Richard Smith.