Funeral services will be held at 10:30 a.m. on Tuesday, Aug. 24, 2010, at Emmons Lutheran Church in Emmons, with the Rev. Julie Fiske officiating. Burial will be in Lime Creek State Line Cemetery, rural Emmons. 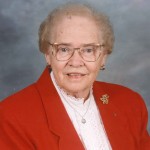 Visitation will be on Monday from 5 to 7 p.m. at Mittelstadt Funeral Home, 902 East Main Street in Lake Mills, and will continue one hour prior to services at the church on Tuesday.

Memorials may be directed to the donor’s choice.

Maxine Lorraine (Hacker) Helland was born on Oct. 12, 1922, in Eagle Grove, Iowa, to parents Max and Mable (Johnson) Hacker. She attended and graduated from Emmons High School in 1940.

On April 4, 1944, Maxine was united in marriage with Lester B. Helland at Lime Creek Lutheran Church in rural Emmons. The couple made Emmons their home, raising four daughters, and enjoying everything there is about small town living.

Maxine was employed by St. John’s Lutheran Home for 30 years as the dining room hostess. She was a member of Emmons Lutheran Church where she kept active with the Hannah/Priscilla Circle. Maxine was a member of the Emmons American Legion Auxiliary. She enjoyed time playing bingo, reading, crocheting, dancing, and doing crossword and jigsaw puzzles.

Maxine cherished time with her family, especially the mother-daughter travels, and bus trips with dear friends.