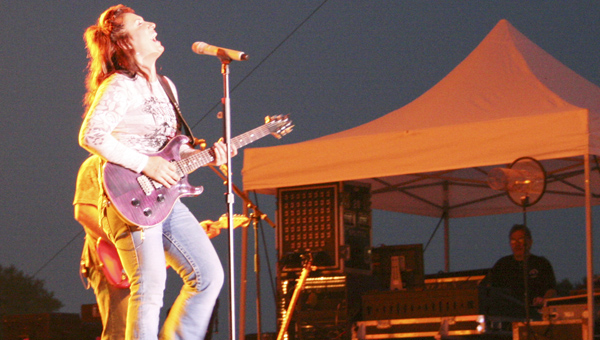 Crowds sporting cowboy hats and fan T-shirts packed the Grandstand Thursday night at the Jo Dee Messina concert. By the time the concert began at 8:30 p.m. the Grandstand was full and most of the reserved seating was as well except a section which Messina labeled “the bus that didn’t make it.”

Jo Dee Messina’s country concert started with a rush of excitement as fans in the reserved seating loudly cheered as she was announced. After launching into one of her No. 1 singles, Messina talked to the crowd as casually as she would all night, creating miniature stand-up comedy performances between songs. Messina opened by saying, “Minnesota is the only place you can wear long sleeves in August.” She then told the crowd about her morning spent running around the lake, commenting that the trail past the cemetery was one of the most gorgeous runs she had been on.

“You should not take for granted how beautiful this town is,” Messina said.

After the first song, Messina put away her purple guitar with a rhinestone peace symbol on the strap and took up a microphone to sing two new tracks from her newest album, “Unmistakable Love.” 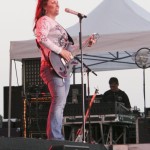 She paused the show to thank a little girl sitting in the third row for a small bouquet of roses. Then after performing a song Messina said was inspired by an old Nashville flame, she sang the title track to her new album, “Unmistakable” inspired by her husband. Messina gave relationship tips and jokes all night.

Messina interacted extremely well with the crowd who answered her waves, comments and smiles with hollers, cries of “I love this song” and much standing, swaying, clapping and singing along. The chorus of “we love you” from the front lead into Messina’s other well-known songs “Welcome to the Rest of My Life” and “Bring on the Rain.” But no song created as much electricity and passion amongst the crowd than when Messina’s purple guitar came back out to play “Heads Carolina, Tails California.”

Messina’s farewell song, “Bye-Bye,” prompted a singing contest between the women and men in the audience; however, since only one man donning a black cowboy hat sang the chorus Messina sang instead. After a night of Messina’s original songs the crowd refused to let her go backstage and chanted “Jo Dee” until she came out for an encore. Fans showed their appreciation by waving lit cell phones in the air.

“I just want to thank you because that is the coolest looking thing from up here,” Messina said about the cell phones.

The last thing Messina wanted to leave the audience with was to know that the world is full of people who like to find what’s wrong with a situation. Messina said not to listen to them, one is never too late or too poor or the wrong color, size or shape to follow their dreams.

“If you have a dream, keep believing,” Messina said. “I want to leave you with that thought: Keep believing.”

Messina’s last song of the night was the only one which she did not write, that was Journey’s “Don’t Stop Believin’.”

According to her official website, Jo Dee Messina was raised in Holliston, Mass. She started her own band when she was 16, comprising herself, and her brother and sister. When she was 19, she drove to Nashville where she debuted with her song “Heads Carolina, Tails California.” She signed on with Curb Records and was produced by Tim McGraw.

Since then she has sold 5 million albums, had nine No. 1 singles on the Billboard country music charts and received two Grammy nominations. Her album “Burn” was No. 1 on the Country Albums Chart and went platinum soon after. Messina was name ACM’s Top New Female Vocalist and received the CMA Horizon award.

Messina’s inspirations were her single-parent mother, Loretta Lynn, Dolly Parton and Reba McEntire. She is currently married with a young son and working on her newest albums, the “Unmistakable” trilogy, “Love,” “Drive” and “Inspiration.”

According to her official website, Messina is due in Canada today for the Capital Hoedown Country Music Festival. Messina will be performing for the Great American Country Nights on Aug. 18.