Funeral services for Norance Ernie Hengesteg of Good Samaritan Center, Albert Lea, formerly of Glenville, will be held Saturday at 10 a.m., at First Lutheran Church, Glenville, where he had been an usher and deacon on the church council. The Rev. Krista Stokke will officiate. Burial will be in Greenwood Cemetery, Glenville. Visitation will be from 5 to 7 p.m. Friday at Bonnerup Funeral Chapel and one hour before the service at the church. 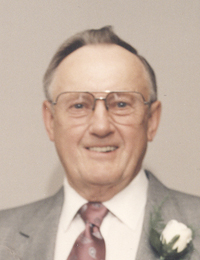 Norance was born May 28, 1922, in rural Northwood, Iowa, the son of Nels A. and Emma Hefta Hengesteg. He was baptized and confirmed in Silver Lake Lutheran Church and attended country school in rural Northwood. He was a resident of Glenville since 1952. He married Altine Vanek Adams, the love of his life, on Dec. 12, 1952, at the Little Brown Church.

Norance grew up on the farm and loved being involved with farming his entire life until strokes prevented him from doing so. He was an Army veteran and had been a member of the American Legion and VFW. After discharge from the Army he was employed by Helmer Quisley on his farm and then drove gravel truck for Amos Knudson. He worked over 35 years for Wilson Foods and retired from Farmstead Foods in 1986. After retirement he continued to farm and also did seasonal field work for Dean Adams. He was a proficient card player, and played often with his Dad Nels, stepmother Olga and son Mark. In later years, the whole family would get together to play “May I.” Other favorite activities were watching the Twins and pro wrestling. He enjoyed spending time with his family, especially his grandchildren.

Norance’s family wishes to express their gratitude to Good Samaritan Center for the loving care given to Norance during his time there and also to the Revs. Krista and Kent for their many visits. God bless you all.