Watch video highlights from the game

In a game which eight rushing touchdowns were scored, Newman Catholic (1-0) was able to break for two long ones, and that was the difference in the game.

Up 21-12 late in the third quarter, Knights running back Tevin Brinson went virtually untouched for a 74 yard touchdown. Early in the fourth, Brinson again broke through the Vikings (0-1) defense, scoring a 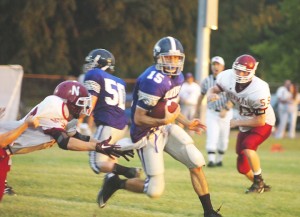 “It’s a real challenge,” said N-K head coach Dave Capitani of stopping the Knights’ offense, “in the first game of the season with some inexperienced linebackers. They wore us down in the second half and we didn’t really have an answer.”

The Vikings did have an answer if the first half, though.

After falling behind 14-0 early, N-K strung together two scoring drives in the second quarter, methodically wearing time off the clock with their rushing game.

Dylan Nitcher scored on a two yard dash with just under 10 minutes left in the half. On their next drive, with six seconds left on the clock, the Vikings found themselves third and goal with the ball a blade of grass shy of the end zone. Spencer Capitani snuck the ball in to close the gap 14-12, but that’s as close as the Vikings would get.

Newman Catholic added unanswered touchdowns in the second half to make it 35-12 until Garrett Olson was tackled into the end zone with 2 minutes and 36 seconds left in the game.

Wide receiver Nik Werner more than tripled his receiving yards total from last season in the opener, with 135 yards on two receptions, as Capitani worked out of the shotgun much of the night.

“This year, we’re a little bit more spread out,” coach Capitani said of the offense. “Granted, if we got three or four yards a (rush) we probably wouldn’t spread it out. But we knew with these guys we needed to give them some different looks.”

The Vikings take the field again Friday night at 7 p.m. in Lake Mills.