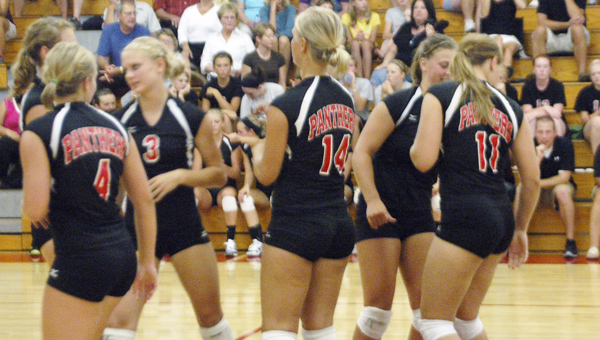 NEW RICHLAND — After a victory on Monday against Southland, the Albert Lea volleyball team looked to make it two in a row Tuesday as they traveled to New Richland to take on the Panthers.

New Richland-Hartland-Ellendale-Geneva dominated Albert Lea up front and the Panthers’ offense was firing on all cylinders as they defeated the Tigers 25-8, 25-18 and 25-13, to earn a 3-0 sweep.

“I think we kind of played scared,” Albert Lea coach Jaime Mauseth said. “They had a really good offense and some great hitters. We just weren’t moving defensively and not moving our feet and they killed us on those things.”

For the Panther, not only did they earn the win, but it was also the first win for NRHEG coach Joe Kuechenmeister, who took over for Jackie Schultz this season. 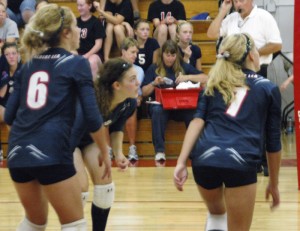 “It feels great,” Kuechenmeister said of the win. “It feels absolutely great. I’m very happy to be here. I was a little nervous before the match but the girls played great.”

In game one, the Tigers jumped out to a quick 2-0 lead until the Panthers worked back to take a 13-8 lead. NRHEG then scored 13 straight points to take game one 25-8.

In the second game, Albert Lea played a more aggressive game and led early on 7-5. Later, Panthers used their offense to pull away from Tigers and ended up winning game two 25-18.

In game three of the match, NRHEG took control right from the start and scored 13 straight points to jump out to a 13-0 lead. The Panthers eventually won the game 25-13.

In all three games, the Panthers used strong play at the net from Anna Schlaak, Jill Kalis and Carlie Wagner to help pull away from the Tigers.

“They make my job a lot easier,” Kuechenmeister said. “They have experience up there and it definitely showed tonight. They were aggressive and they were big for us in the front row. That’s all I ask of them and it’s good to see them perform.”

For the Tigers, Mauseth says they can use this as a learning experience and hopefully it will help them be a better team.

“This is just a learning experience for us,” Mauseth said. “We knew they were good and it’s good to play against them and it helps us be a better team. From this game we need to learn what we need to work on and were going to work on that. When we play teams like (Rochester) Century and teams that can hit like them, we will be a little more prepared because of this game.”

Albert Lea was led in serving by Claire Buendorf and Bethany Sekora, both had two ace serves.

For NRHEG, Anna Schlaak led the Panthers with 12 kills, while Carlie Wagner notched six and Jill Kalis had five.

Both teams are off until next Tuesday, when Albert Lea hosts Waseca.