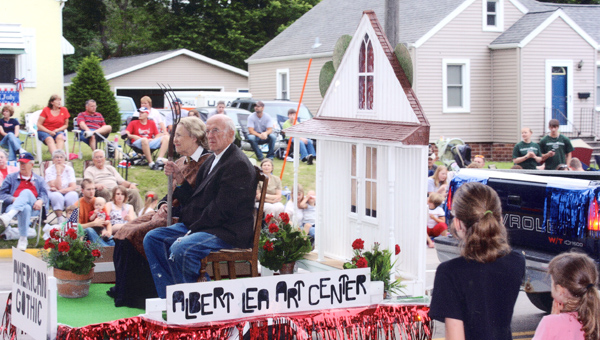 Dick and Barbara Westurn portray the famous farmer and his wife in the Albert Lea Art Center’s American Gothic parade float during the Third of July Parade in 2009. The float was recently donated to the American Gothic House Center in Eldon, Iowa. -- Submitted photo

The Albert Lea Art Center decided to use Grant Wood’s painting “American Gothic” as the backdrop for its July 3, 2009, parade float, blending the design with the “Heart of America” theme. Agnes Boss, 85-year-old local artist, agreed to do the famous farmhouse, thinking it would be two dimensional. As plans progressed, the painting turned into a three dimensional house design with an extended front porch. The float, with Dick and Barbara Westurn portraying the farmer and his wife, won the best overall prize and first in the parade’s nonprofit category. 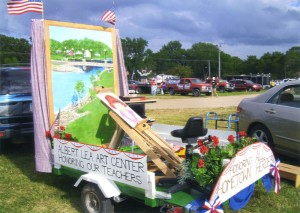 When its picture appeared in the Albert Lea Tribune, it was discovered by the administrator of the American Gothic House Center in Eldon, Iowa, and she expressed an interest in the house. After displaying the house for a year at the Art Center, the board of directors decided to donate the backdrop to the Gothic House Center. The papers were signed and donation completed on Aug. 2.

The thank you letter from Jessica Strom and Molly Moser, American Gothic House Center administrator, stated, “I just wanted to let you know that we did make it back safely and everyone loves the new addition to the visitor center. In fact, we had a couple of rainy days since, and people have used it to take their pictures instead of going outside! Thank you so much for everything.”

In addition, the painting of Hatch Bridge and Fountain Lake that served as the backdrop for this year’s parade float is currently on display at the Albert Lea Convention & Visitor’s Bureau with the possibility of finding its permanent home at the new Vitality Center in downtown Albert Lea. Based on the theme “Hometown Heroes,” the Art Center decided to honor teachers and chose retired school teacher and former school board member Mary Ann Dixen to be the subject of a painting with Lu Callstrom portraying the artist. Both the Fountain Lake scene and the portrait were painted by Agnes Boss.

The Art Center members are excited there is an outreach that extends far beyond its four walls, and that people nationwide will have the opportunity to enjoy art produced by a local artist and sponsored by ALAC.