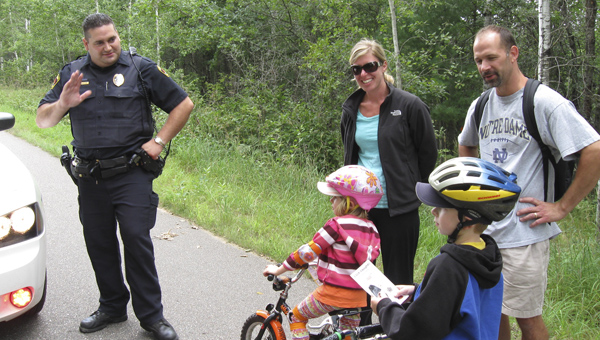 Police in Nisswa hand out tickets for good behavior

NISSWA — Hoping to prevent injuries, police throughout Minnesota are on the lookout for bicycle riders — and their helmets.

According to the Minnesota Safety Institute, head injuries account for two-thirds of bicycle-related deaths. Bike helmets can reduce the risk of head injury by as much as percent.

Persuading people to wear them isn’t always easy. But this summer, 50,000 Minnesota children received a little encouragement to wear their helmets.

One of the front lines of that effort is the north central Minnesota town of Nisswa, where the population of 2,000 swells to 10,000 during the busy resort season. Visitors like to bike along the flat Paul Bunyan Trail, 100-mile route that connects Brainerd to Bemidji along an old rail line.