Pondering life on the prairie

“I’ve been playing the bagpipes a lot lately. I’m the best bagpiper in the section. The other day, I was asked by a funeral director to play at a graveside service for an old bachelor. He had no family and had outlived all but a few friends. The service was northeast of here in an area that wasn’t familiar to me. I got lost. I tried to stop and ask directions but I couldn’t. I got there about an hour late and saw the minister had gone and the hearse was nowhere in sight. The gravediggers were still there and they were taking a lunch break. I felt terrible about being late. I carried my bagpipes to the grave, looked down, and saw that the vault lid was already in place. I didn’t know what else to do, so I started to play. The workers put down their lunches and gathered around. I played as I’ve never played before. The workers began to weep. I finished and walked to my car. As I opened the car door, I heard one of the men say, “I’ve never heard anything like that and I’ve been putting in septic tanks for 30 years.”

Karen Wright of Mankato told me that while she walked a nature trail with her family, her 6-year old son, Grant, asked, “Why doesn’t everyone enjoy nature as much as I do?”

You are just lucky, Grant.

One of the things that some folks don’t like about birding is the early hour at which most trips begin. David Hartley of Fort Collins told me that he likes to go birding with a group called the Magpies. Their motto is, “Sleep later, bird slower, and keep a restroom in sight.”

I have a friend who is attractive to wood ticks. He said that he used to pray that he would be a chick magnet. He figures that he didn’t enunciate clearly enough in his prayers because he ended up being a tick magnet. There is a 17-year-old girl in Conrad, Iowa, who is called “The Deer Magnet.” In the past 12 months, she has been driving automobiles that have hit five deer. She has hit deer while she was driving home from her job at an ice cream shop, and she has hit deer while she was driving to church on a Sunday morning.

I was working in northern Wisconsin. It was a beautiful place and the mosquitoes proved that I have still have lots of insects appeal. At breakfast, a local resident told me that he liked his lawyers lightly battered and deep-fried. An odd addition to any table topic. He was referring to a fish called the burbot. He informed me that the freshwater cod was named this because of its thick slime. A tablemate claimed the burbot is called a lawyer because, allegedly, its heart is located in its rear end. 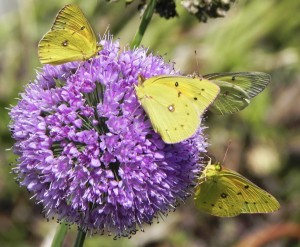 Butterflies remind us that life is made of moments.

French peasants carried thunderstones in their pockets to ward off lightning. When they heard thunder, they would recite, “Stone, stone, protect me from the lighting.” After thunderstorms, people would sift through the dirt for the oblong pieces of rock that were believed to be the arrowheads of thunderbolts. They were likely stone implements of various forms.

The day had a shine to it. I was on the prairie. The old cowboys said that the prairie was ground with its best side up. I live in corn heaven. The big sin or virtue, depending upon one’s viewpoint, of our prairies is that they raise corn all too well. This flat prairie was a survivor of time gone by. I stood amidst the tall grass and marveled at its beauty. The wind blew, turning the grass into musical instruments. From my perspective in the prairie, it was easy to forget that the world was round.

A squirrel can leap 10 times the length of its body.

Most birds have darker colors on their back. That is because the brighter underside of a bird is in the shade of its own body and the combination makes the bird less conspicuous.

“Are there other birds than the killdeer that sing their own names?” Yes, a few come readily to mind. The whip-poor-will, chickadee, phoebe, peewee, bobwhite, and poorwill. Bird identification would be much simpler if each bird was required to call out its own name.

“I see tall plants with long flowering spikes growing in road ditches. What is it?” The common mullein is a biennial, taking two years to bloom. It grows seven feet high and has bright yellow flowers on a spike. It is known as flannel leaf, torch plant, and miner’s candle. Settlers brought mullein from Europe. Leaves of mullein have been used as lamp wicks and Romans used plants dipped in fat as torches. Leaves of common mullein were placed inside shoes for warmth. Quaker women, forbidden to use makeup, rubbed the leaves on their cheeks to give the appearance of rouge. It was smoked in the treatment of coughs.

“I’ve been watching turkey vultures that perch with their wings spread. Why do they do that?” This spread-winged stance is called the “horaltic pose.” The stance is believed to serve multiple functions: Drying the wings, warming the body, and eliminating bacteria. The ultraviolet rays kill bacteria the vultures might have accrued on their feathers while the birds fed on dead animals. Turkey vultures know the best places on the road to eat.

Please join me as I host cruises on Albert Lea Lake on August 15, and September 5. It’s a great lake even if it isn’t a Great Lake. Call 383-2630 for information.

“It is common experience that a problem difficult at night is resolved in the morning after the committee of sleep has worked on it.”–John Steinbeck

“Cranes carry this heavy mystical baggage. They’re icons of fidelity and happiness. The Vietnamese believe cranes cart our souls up to heaven on our wings.”— Mitchell Burgess