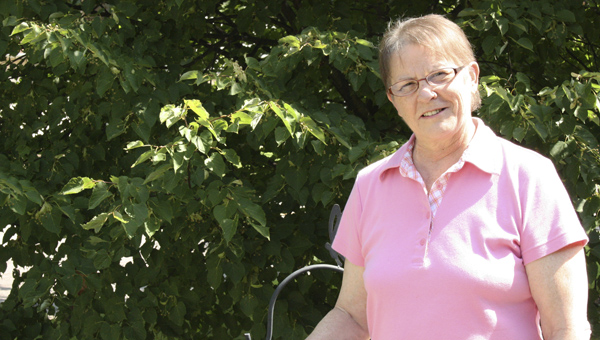 Joani Kuth is one of two people being honored as cancer survivors during the 2010 Freeborn County Relay for Life. -- Sarah Stultz/Albert Lea Tribune

Editor’s Note: This is the last of a three-part series about this year’s Freeborn County Relay for Life honored caregiver and survivors.

That’s the message Joani Kuth, a 10-year colon cancer survivor, would like to share with the Freeborn County community.

One of two honored survivors of the 2010 Freeborn County Relay for Life, Kuth, 63, has seen her share of ups and downs in her battle with cancer; in fact, her battle is still not over.

“I’ve always had a positive outlook on life — seeing the glass as half full rather than half empty,” she said. “An ‘attitude of gratitude’ is one of my mottos and there is so much to be grateful for in life.”

She said she prepares for the worst, but always hopes for the best.

“I’m prepared for the Lord to take me, but I’m not going out without a fight — I have too much to live for so I keep on living.”

Kuth’s journey with cancer began in March 2000, when doctors diagnosed her with stage-four colon cancer, giving her a 25 to 30 percent survival rate.

She said the cancer spread to her liver, gall bladder, ovary and lymph nodes.

“After the initial shock of hearing the word cancer and shedding tears because I was scared for myself and my three kids, I went into my ‘fighting mode’ and asked what I needed to do to fix it,” she noted.

“I decided at that initial shock that someone had to be in that survival percentage, so it might as well be me.”

One and a half weeks later, she was scheduled for the first of five surgeries in Rochester.

She had lung surgery in July 2001, a complete hysterectomy in September 2002, a pelvic and bowel surgery in May 2005, another lung surgery in 2006 and the most recent recurrence in February 2010 of the pelvic region again.

She completed her most recent rounds of chemotherapy in June.

Kuth said throughout the 10 years of her cancer journey she has benefited from working with capable and concerned doctors from Albert Lea, who first diagnosed the problem and then directed her to doctors at the Mayo Clinic.

Her support system of her faith, family and friends has also helped her face what’s coming next.

“I know my God is and always will be my main strength to carry on.”

She said she has been blessed with a good sense of humor during this trial — mostly about herself. Humor gets her through the tough consults, treatments, side effects and daily living.

She has also learned to set short- and long-term goals since her diagnosis.

“To have something to look forward to, something tangible to grab on to, something to throw a party for or to realize an accomplishment of one of my kids — whatever I can set my sights on in a short month’s time, or in four month’s time — it keeps me focused on the prize of more days ahead to live life,” Kuth said.

She has found strength from the Albert Lea Cancer Support Group, where she is able to share her experiences and in turn hear the stories of others.

She has also become a strong advocate of the Relay for Life, which is put on through the American Cancer Society to raise money for cancer research.

Her first team was in 2003, and she has been a part of one ever since.

“It’s an extremely touching time walking the path with other survivors while being cheered on by other teams and community supporters.

The event has grown by teams and the amount of money raised in the last seven years.

She said she was honored to be selected for this year’s honored survivor recognition.

“It’s humbling,” Kuth said. “I’m not one who likes the limelight, but I thought, ‘If I could give back.’”

She is encouraging people to be an advocate for themselves and to ask questions of their doctors if they have them. Also, people should take advantage of any free screenings that are available and have a regular colonoscopy.

She said the Relay for Life brings a lot of activity to Freeborn County, and she encouraged people to come out to the event Aug. 13.

“It’s for a really good cause,” Kuth said.

Freeborn County Relay for Life Chairwoman Vicki Manges said the local Relay for Life committee selected Kuth as one of the honored survivors because they were impressed with her attitude and fight.

Kuth has three grown children and one granddaughter.