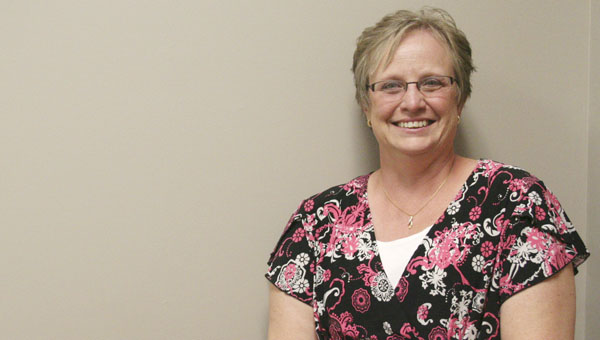 Peggy Brech, a breast cancer survivor, is one of two honored survivors of the 2010 Freeborn County Relay For Life. She said she hopes to spread the message to women of the importance of self breast exams and regular mammograms. -- Sarah Stultz/Albert Lea Tribune

Editor’s Note: This is the second of a three-part series about this year’s Freeborn County Relay for Life honored caregiver and survivors.

As a breast cancer survivor for 22 months and one of two honored survivors of this year’s Freeborn County Relay for Life, she is encouraging women young and old to conduct self breast exams and have doctors perform regular mammograms.

“It can happen to anyone,” Brech said.

For herself, the diagnosis came on Sept. 23, 2008, during her annual mammogram — though she had found a lump in one breast prior to that time.

Just about two short weeks after that date, she underwent a double mastectomy at the Mayo Clinic. She said there was a high chance the cancer would come back in the breast, so she went through with the surgery so she wouldn’t have to go through the ordeal again.

During the operation, doctors found that her sentinel nodes were also positive for cancer, so they tested tissue on both sides of her chest, and all tissue came back benign, Brech said. However, they removed 28 additional lymph nodes on her left side and found that only one was cancerous.

Though doctors believed they got all the cancerous areas, they suggested chemotherapy and radiation as precautionary measures.

Brech said after recovering for six weeks from her surgery, she began eight rounds of chemotherapy, followed by 25 treatments of radiation in the cancer center at Albert Lea Medical Center.

She also elected to have breast reconstruction right away.

After treatment, she went in for checkups every two months; then it switched to every four months, and now she goes in every six months.

She said the experience taught her to have a different outlook on life.

“I don’t sweat the small stuff all the time,” Brech said. “Live one day at a time. Enjoy it while you’re here.”

She noted she is honored to be selected as one of the honored survivors for this year’s Relay for Life and wants to spread the importance of staying positive.

In her role as honored survivor, she rode in a ’57 Chevy during the Third of July Parade, has spoken at a cancer support group and is also involved in Mentoring for Hope. She has also spoken at other meetings.

She will share her story the night of the relay on Aug. 13.

She thanked her support group of friends and family — and her “cancer sister,” Amy Wasson — for all they did to help her during her cancer journey.

She has two grown children, Ryan and Amanda, and one granddaughter, Brookelyn.

Freeborn County Relay for Life Chairwoman Vicki Manges said the committee selected Brech as a honored survivor because they thought Brech could help a lot of people who are just learning of the disease since she had recently gone through the journey herself.

What’s next: Find out about honored survivor Joan Kuth.