A memorial service for Richard (Cash) Peter Cashman will be held on Thursday at St. Odilia’s Catholic Church. The service will begin at 11 a.m. with visitation from 10 to 11 a.m. at the church and a luncheon following the service. St. Odilia’s is located at 3495 N. Victoria St., Shoreview, MN 55126. 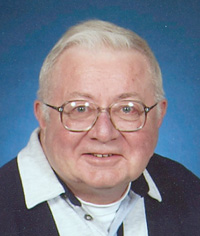 Dick passed away on Saturday, Aug. 28, 2010, at Woodwinds Hospital in Woodbury. Dick was born on Jan. 23, 1941, in Winona, the son of Raymond and Iona (Kirch) Cashman. He grew up in southern Minnesota, graduating from Albert Lea High School in 1958. He then enlisted in the United States Air Force and served in Little Rock, Ark., and Korea. After discharge from the Air Force, Dick worked for Streater Store Fixtures in Albert Lea as their pricing supervisor, where he retired from in 1999.

Richard was united in marriage to Diane Julia Brewer on June 6, 1970, at St. Theodore’s Catholic Church. The couple were members of St. Theodore’s community for 40 years, until their recent move to 6050 Lake Road No. 320, Woodbury, MN 55125.

Dick was an avid bowler for many years, starting in his teens, continuing through his years in the service and as a league bowler in Albert Lea. Some of his bowling achievements included becoming both a doubles and team champion at the 1960 and 1961 World-Wide U.S. Air Force Bowling Tournament at Montgomery, Ala., being named the Albert Lea Men’s Bowling Association’s Bowler of the Year for 10 consecutive years, and receiving at least eight 700 Awards over the years. In 1982 he was inducted into the Albert Lea Bowling Association’s Hall of Fame.

He also enjoyed fishing and hunting and for many years played slowpitch softball on the Elbow Room and Harold’s Bar teams.

In their retirement, Dick and Diane enjoyed traveling to Alaska, Hawaii and the Caribbean. They also achieved their goal of visiting every casino in the state of Minnesota. They also enjoyed family trips to Disney World and San Diego.

In recent years, Dick delighted in spending time with his daughters and granddaughter.

Richard was preceded in death by his parents.

He will be greatly missed by all.