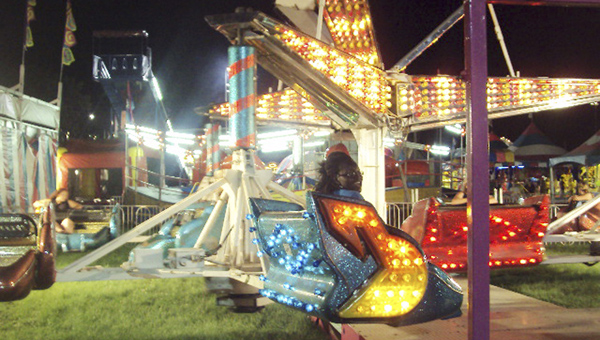 The Starship 2000 is reminiscent of the well-known Scrambler. It sends riders to the outside of its circle, then back to the inside. -- Nya Lony/ Albert Lea Tribune

By Nya Lony, for the Tribune

The rides at the Freeborn County Fair are one of the main attractions and a key part of any fair big or small.

The best time to have thrill-seeking needs met is after 9 p.m. The lines are almost nonexistent and the temperature is more endurable. Be sure to take advantage of deals such as 50 tickets for $30. It might seem like you’re investing a lot, but at four tickets a ride, per person, they disappear quickly.

If speed is your thing, then the Orbiter is what you’re looking for. This amusement ride spins each two-seater compartment while also spinning itself at speeds that will leave your hair wilder than bed head. For a more intense experience, try sitting up and keeping your eyes open. The fair lights blur into aesthetically pleasing smudges of red, yellow and blue. Also, the effort required to sit up will result in feeling as though you’ve developed six-pack abs.

For those who are extremely daring, the Starship 2000 is a must. This ride doesn’t offer seats, but rather a standing position against the wall. Think of spinning a bowl of soup. Everything disperses from the middle to the sides. The Starship 2000 works the same way. Once the ride starts you’ll find it difficult to move as your body feels like it’s melting into wall. For the brave, there are a few cool tricks to try. One of them is standing on the wall. Using the guardrail to steady yourself, you stand up making your body parallel to the ground. The only lingering effect is the nausea, but it can be considered a symptom of a successful ride.

The most hyped amusement ride is the Zipper, and it doesn’t fail to deliver. This ride incorporates heights, spins and a little speed. For more fun, use your body weight to tilt the compartment forward. The more you spin the more fun the ride becomes. Also, when you reach the top, make sure to look at the ground. The view is amazing, especially if you’re upside down.

The Orbiter, the Starship 2000 and the Zipper are only a few of the amusement rides offered at the Freeborn County Fair. There are also rides for the little kids, making the Midway fun for families. And, of course, all ages ride the much-loved Ferris wheel.