Rosamund “Rose” Helen Honstad, age 88, of Wells, died Thursday, Aug. 12, 2010, at Parkview Care Center in Wells. Funeral services will be held Monday at 10 a.m. at West Freeborn Lutheran Church near Manchester. Visitation will be Sunday, Aug. 15, 2010 from 2 to 5 p.m. at Bruss-Heitner Funeral Home in Wells, and will continue one hour prior to the service at the church on Monday. The Rev. Dennis Frank is officiating and burial will be in West Freeborn Lutheran Church Cemetery. Bruss-Heitner Funeral Home in Wells is assisting the family with arrangements. 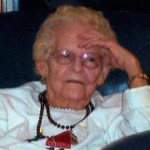 Rose graduated from Blue Earth High School in 1940 and then attended school for secretarial work. She worked at Johnson’s Heating and Air and Kahler Clothing Care as a secretary for several years. In 1981, she worked with her husband Selmer at Blue Earth Siding and Windows. Rose loved visiting with relatives, cross-stitching, traveling, playing cards and spending time with her grandkids.

She was preceded in death by her husband Selmer; an infant son; a brother, Edwin Venn; sisters, Betty Rotunda and Ferna Lemasters.